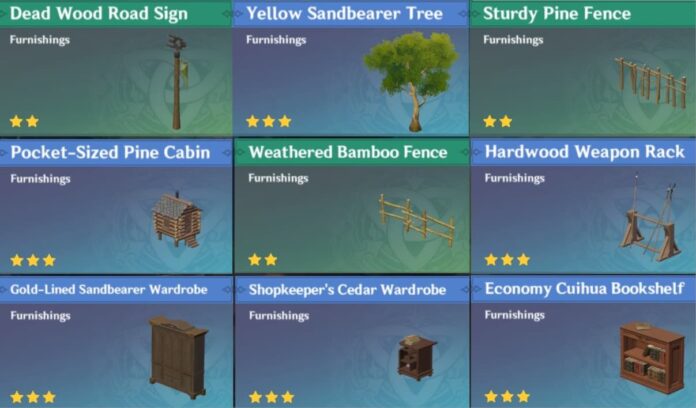 Genshin Impact’s housing system has been a hot topic ever since it was leaked during version 1.5 beta testing – that was shut down due to rampant leaks. According to Genshin Impact 1.5 leaks, the game offers an intricate housing system formed by different cohesive units like Furnishings, decorative items, full control for editing, and much more. In this article, we are going to shed some light on the new Gatherable Items for Crafting Furnishing, and other items.

Here is the list of items, leaked so far, that players can use to craft different furnishing items for their House in Genshin Impact.

So, far we have only four new gatherable items dedicated to Genshin Impact’s Housing system.

Furnishing Items that Players can Craft

Here is the list of Furnishing items that players can craft using the aforementioned Wood logs and other items.(Subject to change)

If done correctly, Genshin Impact’s housing system will become one of the biggest content additions in the game.

We have seen other live service games like Fallout 76 survive because of the great housing system they offer.[Writer’s Opinion] I personally have 1000 plus hours in Fallout 76 on PC and around 400 hours on PlayStation. And, most of the time I and my friends were busy building houses with unique designs. It kept us busy and away from the fact that the game offers very less end game content.

We will update this article if there is any new development regarding Genshin Impact’s new gatherable items and craftable furnishings.