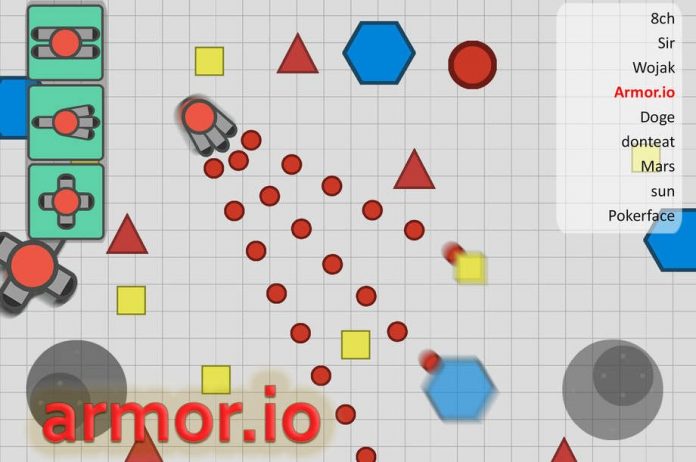 Armor.io is one of those “.io” games that are extremely popular right now: we’ve had Agar.io which started it all, then Slither.io, Tank.io and all the clones and similar games that followed afterwards. Armorio is similar to the popular browser-based game Diep.io or Tank.io, but a bit more complex and I am hereto help make your life a bit easier in the game by sharing some Armor.io cheats, tips and strategies to help you level up faster, stay alive for longer and become the best tank that there ever was.

So, no matter if you’re an advanced player or just started playing the game, read on for our Armorio cheats and tips – they might prove helpful!

1. Shoot the shapes first
I don’t really know how else to call them – it’s the triangles and circles and other shapes that you fin scattered all over the map. Shoot them down and focus to do so early on in order to gain quick experience and level up to make your tank better and more competitive. Early on, take on the squares and triangles as they are easier to destroy, but afterwards try to focus on taking out the large hexagon shapes as they offer more experience.

2. How to defend in the game
Offense is the best approach in this game, I’d say, but sometimes you also have to play it smart and defend. Whenever your health is low, try to avoid conflict and just keep moving away from the hot zones until your health replenishes. If you’re caught into battle and you want to defend, you have more options: either try to run away (tanks will eventually stop following you, especially because others will get in the way), hide behind the shapes to use them as shields or simply shoot back at the bullets coming at you: you can destroy bullets, no matter how strong they are!

3. How to upgrade your tank
There are several stats that you can upgrade after leveling up and the way you do it might make the difference between getting far or getting killed. I will share with you my preferred strategy below, which is pretty much the same every time I play until I reach level 20 or so:

I will play a smart, defensive game at first, staying away from other tanks and destroying the objects in the game – usually, since you level up so fast up to level 10, I will just let my points stack up (you get 1 point per level). At level 10, I will have my stats upgraded as follows: health regain 2, Max health 3, Bullet Damage 2, Bullet Reload 2. We are still not going to get a lot into battle right now, so we need good health and good health regen – at this point, we keep shooting shapes and stay out of battle as much as possible.

For the next few levels, I will focus on upgrading the Damage first, then the Reload. By level 20, I will have divided the next 10 points as follows: 3 in Bullet Damage, 3 in Bullet Reload, 2 in Bullet Speed and 1 each in health and health regain. Movement is the last thing I upgrade, usually just a couple of times before maxing out all other stats – I find it quite useless, to be honest. This is the point where you can actively take part in battles and perform great against other tanks.

4. What types of tanks to choose
Your tank will be upgraded too as you play the game, first and most important choice being made at level 10 – I personally prefer the one with a short, thick launcher as it is better to shoot one but deadly shot instead of spreading out smaller bullets. You will usually have to fight against a single enemy and focusing all firepower on it is the smartest way to go – so stay away, when upgrading your tank in Armorio, from those that spread out your bullets or shoot front and backwards (even though eventually, when you reach a high enough level, you will have to get a tank that also shoots from its back as well).

5. Be patient, be wise
In a fast paced game like Armor.io, strategy or patience don’t seem to be like key elements, but if you want to become the #1 tank, they should be. Be patient and farm on those shapes until you are large enough and don’t start hunting other tanks until you are level 20 at least. Choose your battles wisely – against weaker or injured enemies and stay away from those that are currently stronger than you. Keep your eyes open and make sure you are never taken by surprise and try to surprise or flank other tanks (usually when they are already engaged in battle). If you play it smart and especially if you are patient early on, it will pay off!

These would be our Armor.io tips and tricks. If you have other strategies that work and you’d like to share them with our readers, please do so by leaving a comment below.