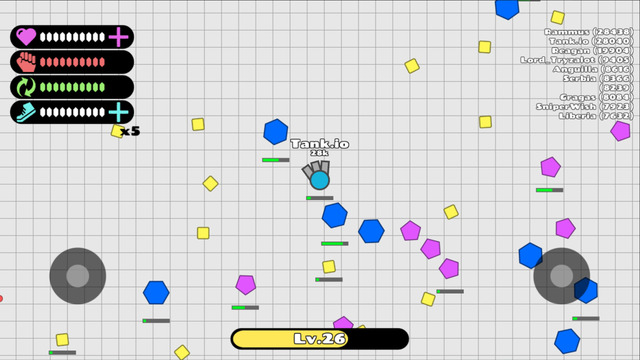 Another entry into popular multiplayer .io series is here! Tank.io puts you in the seat of a circular tank, ready to take on enemy tanks! Destroys tanks and debris to earn experience, which you can use to upgrade your tank and even evolve it into more powerful forms. Like all of the other .io games, it’s a hectic multiplayer experience, so we’re here with our Tank.io cheats, tips and tricks strategy guide to help you get started.

1. Hide when you first start out!

Much like any of the other .io games, there will already be extremely strong players lurking around your world. When you first begin the game, it’s a good idea to try to stay away from the hot zones. The second you see bullets flying around, move in the opposite direction. It’s better to destroy the little shapes floating around to power up before you trying to take some one down.

With each level up, you gain a stat point you can put into one of four categoires.

We recommend investing a couple points into power before you upgrade other things. This is so that you can take out the experience shapes at the start to get yourself a lot of experience fast. Though as always, you can upgrade according to what you need at the moment.

Once your tank reaches level 10, you’re able to evolve your tank!

All of these upgrade options are fine choices, but remember that you only get to pick one. Our personal favorite is the improved cannon, but ultimately it’s up to you and what you prefer. Don’t be afraid to experiment – try them all! At level 25, you’re able to further specialize your evolution.

In this game, if there aren’t any players around for you to interact with, the game will automatically fill up slots with computer-controlled players. You can tell by looking at their names. If you’re familiar at all with the popular PC game “League of Legends,” you’ll recognize names from that game. If they’re also named after a country, they are a bot as well. The reason we point this out is because bots are a bit dangerous! If you get near one, they will lock onto you and pursuit your relentlessly trying to kill you. While a low level one getting aggressive with you is manageable, sometimes bots will happen to be the highest level player on the current server. If one of these high level bots catches you in their sights, you better run as fast as you can, as they’re usually decked out in their final evolution with maxed out stats. If you manage to take them down though, they’re worth a lot of experience.

When you finally do engage with another tank, be in a player or bot, you always want to stay mobile. Moving around constantly makes you a harder target to hit. Be unpredictable! Don’t strafe in one direction – your opponent will catch on eventually and try to fire ahead of you. Switch directions every now and then to mix it up and hopefully throw off your opponent.

If you’ve taken too much damage, try to pull away from the battle if you can. Your tank will regenerate lost health slowly if you stay away from combat for a couple of seconds. Be careful however as the regeneration is very slow, so you’re going to have to hide for a while if you want to survive.

That’s all tank-busting tips we have for Tank.io. If you have any other tips or tricks to share, leave a comment below!