Home Game Guides Who Are The Tamamos in Fate Grand Order? – Answered 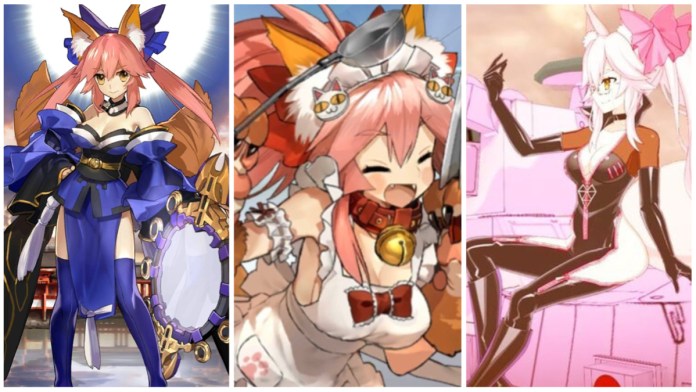 Fate Grand Order has a reputation for taking popular characters and recycling them into alternative versions or new characters. Of course, this isn’t a bad thing, as, without that, we wouldn’t have had Seraph, the in-game event inspired by the Fate CCC games. CCC and Seraph featured villain BB and her many clones who all had the faces of a famous Fate character called Sakura Matou.

CCC also featured Tamamo no Mae, the fox spirit servant, who has 9 clones, 3 of which are currently in Fate Grand Order. The differences can be confusing, but it isn’t once you learn about them. Thus, who are the Tamamos in Fate Grand Order?

The Caster-class Tamamo no Mae is the original of these clones, having manifested them when she cut off all but one of her tails at some point in the past. She is based on the Tamamo no Mae from the legends of the fox spirit courtesan who seduced the Emperor. Tamamo will love and protect any Master that summons her, perhaps a little too much depending on your taste.

Tamamo Cat, also known as Tammy Cat, is a Berserker-class servant who was originally one of the tails of Tamamo no Mae. Each of the tails represents part of who Tamamo no Mae is. As such, Cat represents the childlike and feral side of her. She is as pure-hearted and innocent as they come, though a bit of an airhead at times. Cat often works in the kitchen at Chaldea with Emiya. Also, no one is really sure if she’s a cat, dog, fox, or a combination of all.

Tamamo Vitch is very interesting because without going into any deep spoilers, she’s not quite who you think she is. She was introduced in a unique way to the game, likely for the reason that when a character has 9 versions, it’s important to sell them all with a sense of individuality.

Currently, there are four other known variations of Tamamo. These are not in the game yet and we know very little about them except for their names. A fun lore tidbit is that none of the Tamamos like Caster Tamamo because they are bitter over her cutting them off. The remaining four are:

To sum it up, every Tamamo is basically a variant of the original Caster, each with their own personality. Since you now understand the differences, you’ll be able to appreciate them even more in your Fate Grand Order game!

Who Are The Tamamos in Fate Grand Order? – Answered