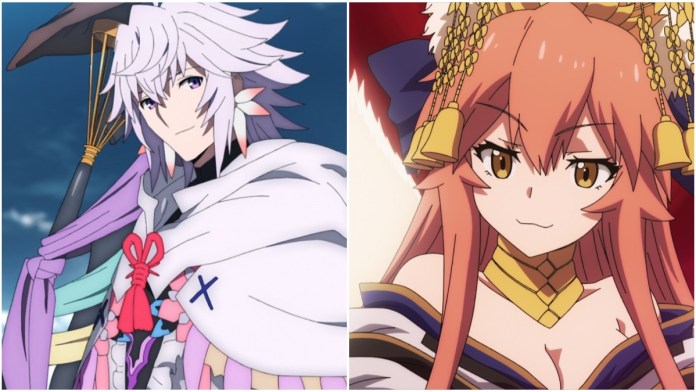 Fate Grand Order’s North American server currently has four of the game’s most powerful Casters. Because of the way the game allows you to use other players’ characters as your support, you do not need to summon them to use their skills. Each player has a support section in their account where they can put their chosen characters out for public use by other players. Each Caster serves a different purpose and is usually geared toward helping one character class. Here is how to use all four of them.

This is the most common Caster to find in support lists. Merlin’s powers are geared towards buffing Buster-based characters such as Musashi, Siegfried, and Caster Shuten Doji. He works best when chosen as the support for boss fights. Merlin’s Noble Phantasm Garden of Avalon restores the HP for all allies for five turns when used and also increases everyone’s NP gauge by five percent, so it works well for multi-turn battles.

The most recent meta Caster support added to the game, Skadi is tailored to buff Quick-based characters such as Berserker Lancelot and Edmond Dantes. Because of her Quick-card buff skill Primordial Rune and 50 percent Noble Phantasm battery skill Allfathers Wisdom, she is highly valued for being able to allow characters to loop their Noble Phantasm.

Caster Tamamo is meant to buff Arts-based characters. Her Noble Phantasm Eightfold Blessing of Amaterasu charges the Noble Phantasm battery of the allies on the field when overcharged, reduces skill cooldown for allies, and restores HP for allies. It can be looped with other Arts-based characters such as Bride Nero, Beni-Enma, Fionn, Prince of Lan Ling, and Lancer Meltryllis.

This character’s official name is Zhuge Liang, but he is commonly known as Waver. He is probably the second most common Caster to find in Support lists. There’s a good reason that most players truly aspire to have Waver in their party. An all-purpose farming Caster, Waver does not specialize in any particular class and as such fits into most compositions. His skills Tacticians Command and Tacticians Advice both increase the Noble Phantasm battery for all allies. His first skill provides a critical strength buff and his third skill provides a damage buff. These make him one of the most useful characters to have and use in the game.

Fate Grand Order – How To Use the Support Casters