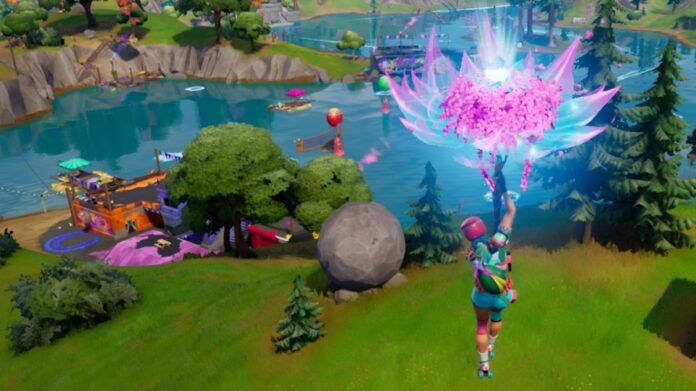 Runaway Boulders are a new feature introduced in Fortnite Chapter 3 Season 3. They are giant rolling boulders which can be sent tumbling down a hill to cause damage to anything or anyone in its path. The boulders use physics-based balance that allow players to break the rocks beneath and send them rolling away. Find out below where to find Runaway Boulders in Fortnite Chapter 3 Season 3.

These giant boulders are sat atop a pile of rocks. Players can destroy the pile of rocks beneath each boulder to send them rolling down a mountain or hill. If the Runaway Boulder collides with a player, wildlife, structure, or vehicle, it can deal damage.

These Boulders can be dislodged using any weapon or a vehicle, including Ballers. A week 3 quest asks players to dislodge or destroy three Runaway Boulders with a melee weapon. If you want to complete this quest in one match then head to the snowy area of the map where you should be able to find a few of these boulders on top of hills and mountains.

The Runaway Boulders can be found in most high places around the map but the easiest place to find them are near Rave Cave, Tilted Towers, and Shifty Shafts. There are a few dotted around the outskirts of The Sanctuary and The Daily Bugle too.

Related: Where to Find a Temple in Fortnite Chapter 3 Season 3

To dislodge the Boulder just hack at the rocks beneath it with your pickaxe (three hits should do it) and let it roll. If you want to destroy it, it will take more hits as it has quite a lot of HP.

To complete the week 3 quest there is no need to hit an opponent with the boulder so you are pretty much free to just find one and let it roll!

That is all you need to know about these Runaway Boulders in Fortnite Chapter 3 Season 3! Good luck.

Where to Find Runaway Boulders in Fortnite Chapter 3 Season 3