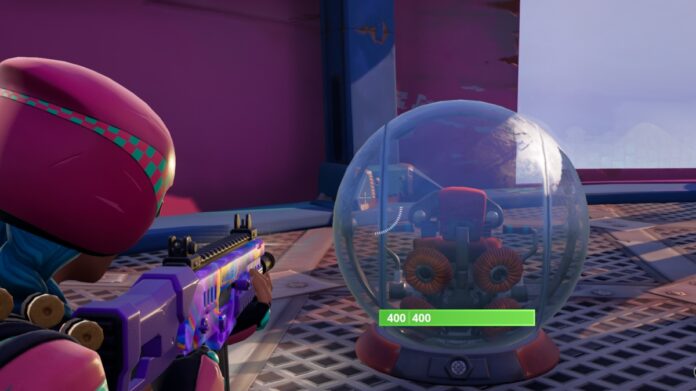 The Baller was first introduced in Fortnite during Season 8, the season of pirate adventures, volcanoes and jungles. It was subsequently vaulted for Season X, only to make a comeback a few years later in Chapter 3 Season 3. The Baller is a fun, single-seat vehicle that can move in any direction as it spins on a single axis. Players can use the boost or the grappler to get around quickly. Find out more below!

Using The Baller in Fortnite

The Baller’s boost is short but very useful. It means players can manoeuvre quickly, and boost into structures, causing damage. The Baller’s grappler works similarly to the Grapple Gun used by players, except it has more of a tether function rather than pulling the player towards the wherever it has grappled onto.

The grapple function can both extend and contract, meaning you can tether the Baller to a tree or building, then pull the line in to ascend or let it out to descend. This is great for controlling the length of the line and having the optimal swing between trees or buildings. Be warned however that, although it has 400HP, the Baller can be damaged and shatter. If the Baller is shattered and broken while in the air, it can cause the player fall damage.

The Ballers currently run on battery power, meaning they can run out of juice eventually, especially if the boost is used often. The battery cannot be refuelled.

Where to Find The Baller

The Baller has a 100% spawn rate at the Rave Cave during Chapter 3 Season 3. The spawn points are inside the rollercoaster, and in specific areas around the outside. They do not spawn anywhere else on the island at this time.

To use the rollercoaster, just jump into a Baller and ride on the tracks. It propels the Baller automatically so you can just sit back and enjoy the adventure as you speed through and around the Rave Cave. It is easy to disembark at any point by grappling to an object outside of the tracks and boosting away.

That’s everything about The Baller in Fortnite! Jump in one now and speed across the map in no time at all. Let us know in the comments below if you are glad to see the Baller back in business.

How to Use a Baller in Fortnite Chapter 3 Season 3