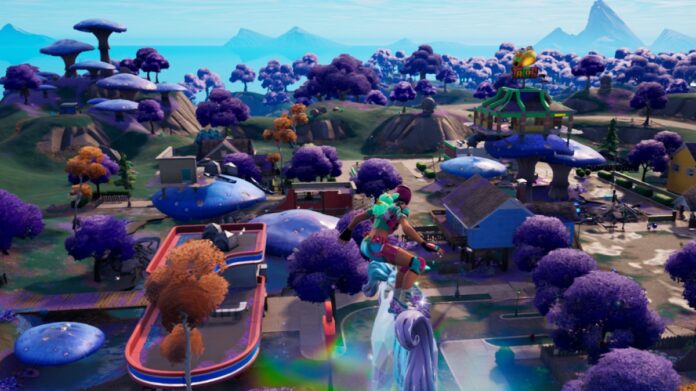 The new season has arrived in Fortnite and the theme is Vibin’. There are new named locations and points of interest (POIs), rideable animals, brand new weaponry, and so much more! The map has vibrant colours splashed across some of the old areas, and even a few places players can stop for a moment and have a boogie. Check out the guide below to see what exciting things await us in this new season.

Players may notice that the map is still pretty much the same apart from some colourful changes and the addition of a few new locations to explore. Much of the east side of the land is the same, with new POIs and named locations added to the west side:

The new named locations start with Reality Falls which is home to The Reality Tree, bouncy mushrooms that give you shield and health, Shield Mushrooms, waterfalls, a cavern, and geysers. Here players can also pick Reality Seeds and nurture their own sapling to provide items and weapons. Next to explore is the Rave Cave which is an amazing party vibe found under the Screwballer rollercoaster. Players can jump on a Baller and take a trip around this whole area!

Greasy Grove has had a colourful makeover too and is full of mushrooms and purple trees, with the Taco restaurant found atop a giant mushroom! The old favourite, Tilted Towers, is once again under construction after the devastation caused in Chapter 3 Season 2. The statue near The Sanctuary has also had a colourful vibe upgrade.

The new POIs include Drill Hill which was once the location of The Fortress, Shroom Chalet, home to Quackling, Stools Fuels, near Shroom Chalet, Beach Bash, a coastal party area, Scratch Pad located west of The Reality Tree, and Displaced Depot. Displaced Depot is where players can find The Shark, The Chair, and some familiar depot buildings… All of these new POIs are located in the new biome.

Even Spawn island has had an upgrade with vivid colours and a tropical party feel:

Three new weapons have been added, never seen before in Fortnite. They are the Two-Shot Shotgun, the DMR (Designated Marksman Rifle), and the Hammer Assault Rifle. The Thermal Assault Rifle and Drum Shotgun have been vaulted and replaced with the DMR and the Two-Shot. There is also talk of a mythic rarity heavy sniper rifle so keep your eyes out for that one.

Players will already know about grabbing a chicken and floating about with the little feathered friend, but two other options are now available! It is now possible to ride on wolves and boars. Offering the animal food will make them chill out long enough for you to jump aboard and run around the island on the back of a wild animal. A device called The Saddler is apparently also going to be available to help us tame these creatures.

A new device called the Grapple Glove will be added, combining the web shooters of Spiderman and the Grapple Gun, giving players another way to get about the island. Sliding has had a slight upgrade and is now extended when sliding down a hill.

That is all we know so far about everything new that has arrived in this amazing new Fortnite season! Let us know in the comments below what you are most excited for! Good luck and happy exploring.