Home Game Guides Where to Find Food Consumables in Fortnite 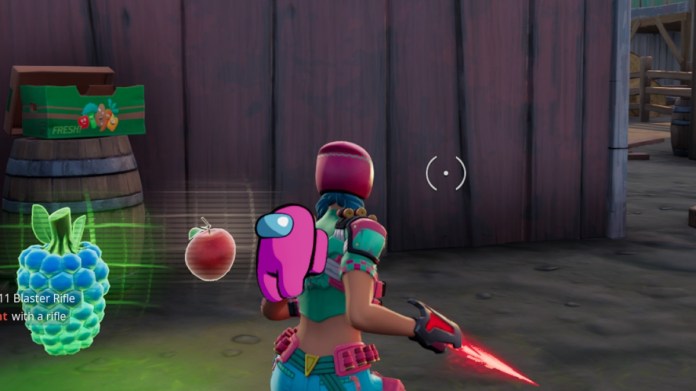 Fortnite has a variety of consumable food for players to restore their health. Food consumables were first introduced back in Season 4 starting with the classic Apple and then the Mushroom. Generally the foraged items offer players HP, but sometimes they give other effects too such as anti-gravity (Hop rocks) or speed (Chilli Peppers). Find out below where to find food consumables in Fortnite.

Food consumables can often be found in Produce Boxes. Each Produce Box gives 4 consumable food items. These are either 2 different items in stacks of 2, or 4 of the same item. Produce boxes are located at Gas Stations, in stores and buildings in named locations, or in Wooden Shacks. Sometimes they can be found in random places outside but it easier to find them inside on shelving units.

Consumable food can also be purchased from NPCs such as Bao Bros in Condo Canyon. These usually cost 10 Gold Bars.

Players can carry up to 15 stacks of one type of food in one item slot. 10 items of food such as Apple, Banana, or Coconut, give as much HP as one full Med Kit so carrying a full stack of 15 is actually really useful.

Related: How to Unlock Indiana Jones in Fortnite

Consumable food includes Meat. This can be gained from any of the wildlife: Boar, Wolf, or Bird. Meat can heal 15 HP and be carried by players in stacks of 4. They can also be used to tame Wolves. Boar also drop Shield Mushrooms.

We hope that has helped you find the consumable food you need in Fortnite! Good luck.

Where to Find Food Consumables in Fortnite