Home Game Guides How to Unlock Indiana Jones in Fortnite 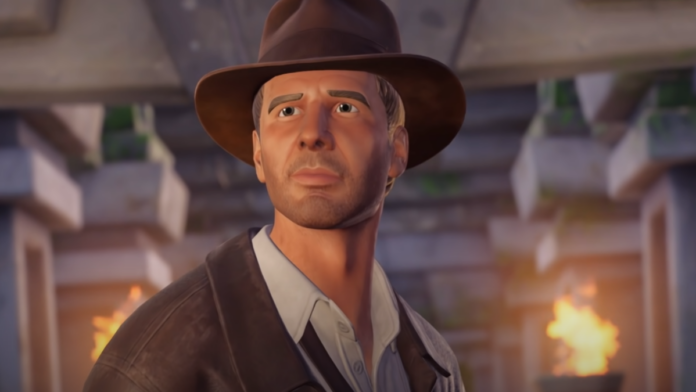 Indiana Jones was rumoured to be coming to Fortnite Chapter 3 Season 3, and it turns out those rumours were true! The adventurous professor of archaeology will be making his Fortnite debut as the bonus character in the Battle Pass. He will be the second huge movie franchise character to be included in this pass that also includes Star Wars bad guy, Darth Vader.

The reason Indy has come to Fortnite is due to his new movie being released in 2023: Indiana Jones 5. To unlock this movie crossover character, Fortnite players must first purchase the Battle Pass for Chapter 3 Season 3, or be a Fortnite Crew subscriber. Battle Passes cost 950 V Bucks and include an amazing array of skins, back bling, pick axes, and so much more.

The Indiana Jones skin is locked up as the ‘secret’ Fortnite Battle Pass outfit. This section is always a teaser for fans who cannot unlock the skin straight away. It looks like Indy will get his own wrap, hat logo banner, explorer back bling, and harvesting tool, among other things. Excitingly there is talk of a loading screen designed by the iconic Hollywood poster designer Drew Struzan, best known for his artwork on Star Wars and Indiana Jones posters through the years.

To get their hands on this epic skin players will have to wait until July 7th 2022 when this section will be ready to unlock by completing the Indiana Jones challenges. This is just like in the previous Battle Pass when players had to complete challenges to get the Prowler skin.

There is a second page of Indiana Jones cosmetics to unlock but players will have to wait and see what is coming as it is all locked up right now! That is all we know so far about this ‘secret’ skin coming soon to Fortnite Chapter 3 Season 3. Let us know in the comments below if you are excited for this brand new crossover.

Fortnite is available to play on mobile, Nintendo Switch, Xbox, Playstation, and PC.

How to Unlock Indiana Jones in Fortnite