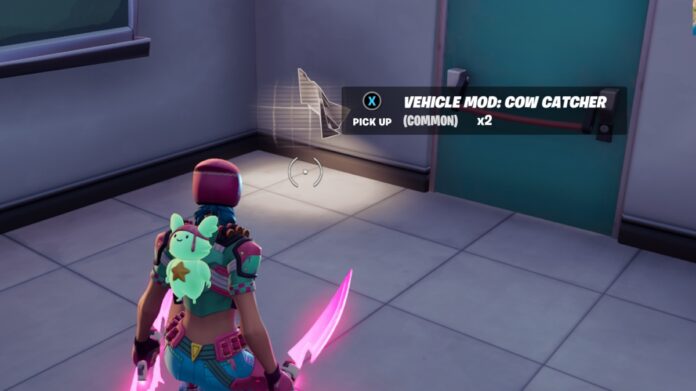 This new season in Fortnite Chapter 3 includes some exciting additions including tanks, sprinting, mantling, and IO guards surrounding many named locations. Mini-guns are positioned at these IO camps, with airships flying overhead and anti-vehicle barriers blocking the roads. To get rid of these pesky barriers, Fortnite have also added vehicle mods called ‘cow catchers’ that players can place on the front of their car or truck and drive straight into the barriers, destroying them. The cow catchers are used as part of a Week 3 Resistance Quest to destroy barriers. Check out where to find these vehicle mods and how to use them in our guide below!

Where to Find the Cow Catcher Vehicle Mod

The cow catchers can also be purchased from any NPCs who hold them, such as The Foundation near The Sanctuary, and can be purchased for 100 Gold:

The cow catchers come in a stack of 2. They can be purchased from NPCs, taken from red toolboxes, or picked up as floor loot and put in your inventory in stacks of 4. They can then be thrown at the ground to use as temporary, immovable, shield or be thrown at a car to create an armored vehicle. They can also be thrown at player’s builds (in build modes) to destroy the structures.

Where to Find Cow Catchers in Fortnite Chapter 3 Season 2