Home Game Guides How to Complete All Week 3 Resistance Quests in Fortnite Chapter 3... 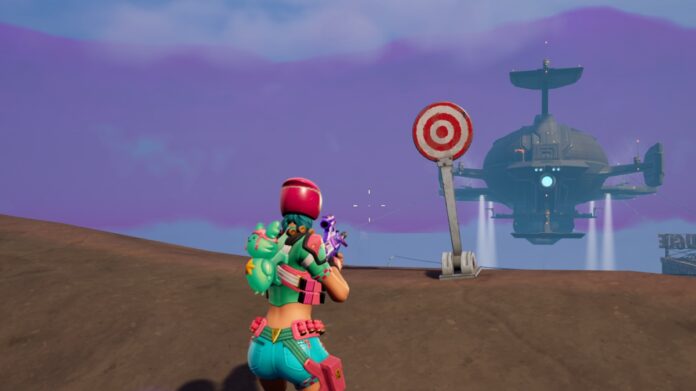 Another week of Fortnite quests is here, moving along the exciting Chapter 3 Season 2 storyline. Complete each quest and gain 23K a piece, helping you level up and gain those all-important Battle Stars. This week’s quests get you finding items, donning disguises, and helping The Imagined. Find out what you have to do with our comprehensive guide below!

Related: Where to Find Cow Catchers in Fortnite Chapter 3 Season 2

Another device uplink must be established near Chonker’s Speedway, Command Cavern, or The Daily Bugle. It could be useful to establish this one at The Daily Bugle as the next quest is to hit 4 different targets with a sniper from at least 75 meters away. The targets look like traditional targets complete with bullseye:

The best way to do this is to find a sniper rifle in The Daily Bugle, then make your way to the southeast of cliff-face surrounding The Daily Bugle to get a good shot at each of the 4 targets:

The next quest is to establish a device uplink near Camp Cuddle or The Joneses. We attempted this one at The Joneses and then moved straight onto the next 2-part quest for The Imagined: destroy structures above a Data Receiver and collect its data. The signal cannot connect, so the ceiling above must be destroyed:

Then you must pick up the data dropped by the receiver:

A final device uplink must be established at Synapse station next, before moving on to the next 2-part quest. The first part is to find the disguise near Synapse Station, hidden near a tall rock named ‘Lil Shaftie’:

Without dying, don the disguise and place the weapons schematics at Synapse Station. If you get caught up in a battle and die, you will have to find the disguise again.