Home Game Guides Warframe: How to Complete the Halls of Ascension 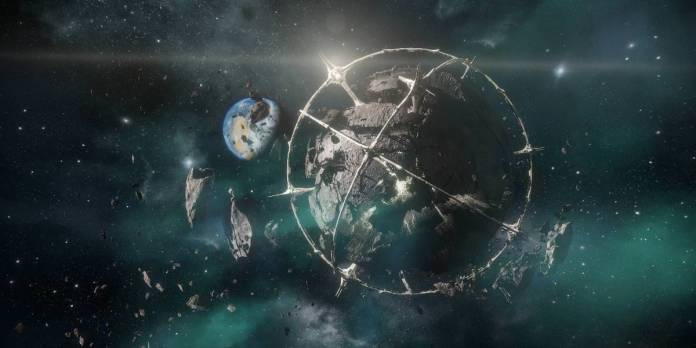 The Halls of Ascension are a set of special puzzle rooms found on Lua, Earth’s Moon, in the Warframe universe. There are seven different rooms that can appear on Lua, each with their own unique test that will challenge the skills of players. Passing a test will reward players with special mods that cannot be found anywhere else in the game, so you’ll want to collect them. We’ll be covering all seven rooms right here in our Warframe guide on how to complete the Halls of Ascension!

As the name implies, the Agility Test will be an examination of your parkour skills. You will enter a room with a giant golden object that resembles a pipe organ, and your objective is to make it to the very top. We recommend using a Warframe that has good mobility, like Zephyr, Titania, and Nova.

To start the test, you must shoot the shining silver button located above the archway where you entered from. Two of the bottom pipes’ lighting will turn green, and the lids will pop open. Quickly jump into the open pipes and stand still for a second — the pipe will launch you high into the air. Look for another shining button on the walls and shoot it quickly as you’re in the air. This will make more pipes open up, so try to land on them. You’ll repeat this process as you work your way to the top.

Falling down all the way to the ground at any point during this sequence will reset it entirely, so you’ll need to be careful with your jumps. Mods that extend your aiming time or manipulate gravity are very helpful when looking for the buttons to shoot. During your air time, quickly scan the room for the buttons, and keep in mind that there will be one set of pipes that require two buttons to be shot.

If you manage to blast yourself all the way to the top using the pipes, the ceiling gate will open, and you can double jump into the final room to claim your reward: the Exilus mod Agility Drift. Agility Drift decreases the damage you take while airborne and increases your Evasion.

Related | Warframe: What are the Grineer’s Weaknesses?

You’ll need to cooperate with some friends or strangers for the Collaboration test, so we recommend getting a group together for this one. Alternatively, Warframes with abilities that summon other entities like Loki and Chroma can get by with the aid of their summons, Spectres, and sentries.

The Collaboration Test takes place in a room with a giant pit in the center. There will be a pad on a floating platform, and stepping on it will light up another pad further down. Get another player — or you in Operator form — to step on the next pad.

This will lead you into a larger room with four pads at each corner of the room. Stepping on one of these pads will open up a gate that leads into a tunnel. Follow the tunnel down to find another pad to step on, though you don’t need to stay on this pad.

Once all four pads have been activated, the golden box in the center of the room will open, and inside you’ll see four more pads. All four pads must have a Warframe/Operator/summon/sentry on them. The ceiling gate will open to reveal your reward: Coaction Drift, another Exilus mod. Coaction Drift increases your Aura’s strength and effectiveness.

The Cunning Test takes place in a large room with four pillars in the middle. Your first goal is to find the glowing caps on the left and right sides of the room. Shooting these caps will cause water to pour out, and with both caps destroyed, the platform in the center of the room will begin to glow. Before you move to the center, examine the four pillars and take note of where the exposed sides are.

Stepping on the platform will cause a Security Eye mini-boss to spawn, identical to the one fought in The Second Dream. The Security Eye is invincible and cannot be directly attacked, so your goal is to have it destroy the four pillars. Hide behind the pillars with the exposed side towards the Security Eye, and it’ll blast it. Destroy all four pillars to open the center gate.

Your reward for clearing the Cunning Test is the aptly named Cunning Drift, another Exilus mod. The Cunning Drift increases your sliding power, ability range, while reducing friction.

The Endurance Test occurs in a room with a large ring-shaped platform in the center. This test is best tackled with friends, and one of you should build for lots of health and defensive attributes.

To start the Endurance Test, one player — preferably the one with the most health and defense — must stand in the middle of the center platform, upon which laser turrets situated all over the room will begin firing on the player. Two glass tubes on the side will begin to fill up with water, and the test is complete once the tube is completely full.

The laser turrets can be temporarily disabled to lighten the damage upon the player enduring it all, so all other players should aim to do this. The lasers on the second floor and the ones orbiting around the center platform have white backsides that can be shot to disable them. The single laser from the center opening can be blocked by shooting the lantern above it.

Once the glass tubes fill up with water, you will complete the test and your reward spawns on the center platform. The reward is the Endurance Drift, an Exilus mod that increases your maximum energy and parkour velocity.

Related | How to Get Nezha Prime in Warframe

The Power Test takes place in a room with four light blue orbs in the corners. Your objective is to transfer 40 energy into each orb to power it up. You have to be quick moving from orb to orb, as orbs will eventually power down if you take too long.

An easy way to complete the test is to use your Operator form, as void energy can also be transferred to the orbs. You can leave your Warframe at one of the orbs as it’s charging it while you enter Operator form and charge the other orbs.

A staircase leading down will unlock in the center of the room after all four orbs are charged. Head down to claim the Power Drift Exilus mod, which increases your ability strength and knockdown resistance.

The initial room of the Speed Test is full of lasers and two Thumper Orbs that will knock you around. A shining pad will be on the wall near the ceiling, so shoot it, and you’ll see a pillar emerge from the ground. Two doors will open on the sides of the room, and they both lead to obstacle courses. Step on the pads in front of the doors to begin the course.

You have to blaze through the obstacle courses as fast as possible — as soon as the doors open, the door at the end of the course will begin to close. You must reach the end before the door closes all the way, and you have to complete both courses to unlock the path forward.

One course contains ice hazards, so you’ll need to stay airborne while staying on the move. There are also pillars that rise and fall, so be mindful of them as you fly through the course.

The other course contains a bunch of Thumper Orbs, alongside the doors that will try to stop you in your tracks. Any Warframe that is immune to the Thumper Orbs’ knockback is incredibly useful here.

After you’ve completed both courses, the pillar in the beginning room will rise all the way to the top, opening a gate. Jump through to claim the Speed Drift, an Exilus mod that increases your sprint and casting speed.

The Stealth Test takes place in a long hallway. The first thing you’ll notice when you walk in is a glowing pad, which will begin the test once you step on it. Blue lasers will suddenly appear all over the room, and your objective is to reach the end of the hallway without touching a single laser.

You can complete the Stealth Test pretty easily if you’re good at parkour, as you can simply dash and slide past all the lasers. There’s also a big oversight in this test — you can ignore the glowing pad at first and instead run all the way to the end of the hallway, where you can see the portal that leads to the end room. Leave your Warframe on top of the portal and return to the glowing pad to activate it, and your Warframe drop into the portal, completing the test. You don’t even need to worry about the blue lasers anymore!

Warframe: How to Complete the Halls of Ascension