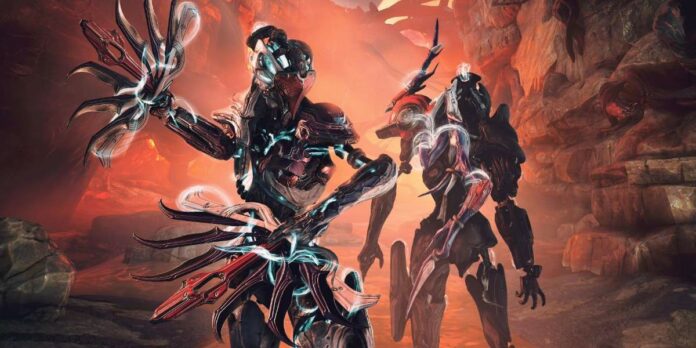 Deimos, one of Mars’ moons, has officially arrived in Warframe, but it’s hardly the tourist attraction. Deimos is home to a very important ancient relic known as the Heart, which is the source of all void energy in the universe. The Infested have found their way to the Heart, and now it’s up to you to stop them with the help of our Warframe: Heart of Deimos quest guide!

How to Start the Heart of Deimos Quest

Heart of Deimos is a solo-only optional quest that was released in update 29. This quest line takes place in the Cambion Drift Landscape, which is home to the Entrati Orokin, the family that seeks to rescue the Heart of Deimos. As such, you’ll need to enlist their help to start the quest. Completing the Heart of Deimos quest line rewards you with the Xaku blueprint, the Warframe comprised of three different warriors.

First, you need to complete the Earth to Mars Junction. After completing the Junction, you’ll receive a message from a Cephalon servant named Loid, who assists the Entrati. You can start the quest proper from the codex once you read the message.

How to Complete the Heart of Deimos Quest

Head to the Cambion Drift, and Loid will automatically contact you. Loid is accompanied by Otak, who is essentially Loid’s alter ego. They’ll tell you that the Infested have taken over Deimos, and the heart — the center of all void energy — is at risk. Before Loid lets you into the Necralisk, you’ll have to prove yourself by destroying two Infested Hives. The hives are pretty simple to take down, so follow the objective markers and eradicate them.

Loid will grant you access to the Necralisk, so head over there. The Necralisk is another city hub, so feel free to explore if you’d like. Find Loid once you’re ready, and he’ll take you to Mother, the head of the Entrati family. Talk to her and you’ll have three dialogue options:

Select all three options in order for the scene to advance. Mother will tell you that the Heart powers all Orokin technology, including the titular Warframes, and the only way to stop the Infested from destroying it is to find her ex-husband, or “Father”.

Exit the Necralisk back out into the Cambion Drift and Loid will notify you of nearby Necramech signals. Follow the objective markers and fight alongside the Necramech. The Necramech will inevitably be destroyed, but it will lead you to Father’s location. Talk to him, but he won’t understand the severity of the Heart’s situation. Return to the Necralisk.

Upon returning to the Necralisk, you’ll be given a new objective to meet with the Daughter. She will agree to help you convince Father, but first you’ll need to help rebuild her sample collection. For this next objective, make sure to equip a Fishing Spear. Exit the Necralisk and head to the objective marker.

You’ll be introduced to two wyrms: Fass and Vome, who are locked in eternal combat. Fass will be obliterated by Vome, which causes Fass Residue to spread all around. You’ll need to collect 10 Fass Residue, after which a new objective marker will point you to an Exocrine river.

The Exocrine river is too viscous to fish efficiently, so you’ll need to wait for the fish to swim up out of the river before you can spear them. Daughter’s collection requires three fish samples, so return to the Necralisk after you’ve acquired them. You’ll be ambushed, so be ready for a fight. Give the samples to Daughter, and she’ll ask you a question, but it doesn’t matter what you reply with.

Part 4: Descent to the Heart

Head outside the Necralisk to meet an Esophage that will take you to the heart, at which point you’ll run into the Son, the one who caused the Heart to become overrun by the Infested. Talk to the Son, then fight your way down to the Vault. The Vault door is locked by a Requiem Cipher — you’ll need to memorize the door’s four icons, then interact with the nearby Reactive Crystals in the order you saw on the door, from top to bottom.

After the family feud cutscene, you’ll need to return to the surface to take the Esophage back to the Necralisk. With the Heart destroyed, your Warframe is barely clinging onto life! Weapons are disabled, health and shields are at critical levels, and your mobility is extremely sluggish. You must sneak past the corrupted Necramechs on the way to the surface, but there’s a checkpoint here, so it’s not a big deal if you die.

Related | How to Capture an Eidolon in Warframe

Part 5: Through, and Beyond

Back at the Necralisk, the family pulls together and Father grants you access to a Voidrig Necramech, since your Warframe is out of commission. You’ll have to fight your way back to the Heart as the Voidrig Necramech, which packs quite the punch. You’ll gain new abilities as you progress through the quest.

Once you reach the Heart, you’ll need to eradicate the hives that have grown in the chamber. Destroy the hives, and panels will light up on the ground — stand on them to equip an Omni to repair the Heart. The corrupted Necramech from before returns, so target its weak points: the shoulder joints, the frontal plating, and the blue scar on its back.

Return to the Necralisk and talk to Grandmother. Congratulations, you’ve officially completed the Heart of Deimos quest line! Your rewards are the Xaku Warframe blueprint, the Deimos Necralisk Captura scene, and access to the Entrati syndicate.