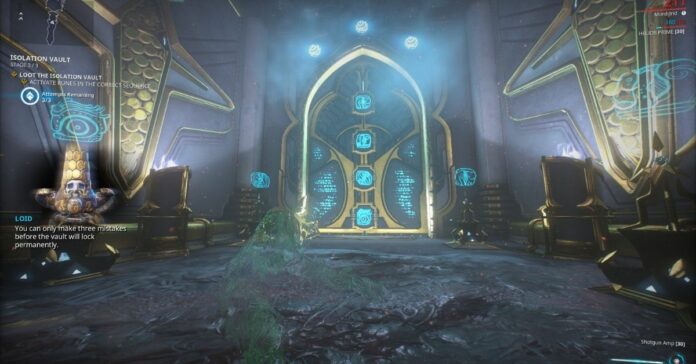 Once in the world of Warframe, when the Deimos wasn’t conquered by the Infested, it served as a part of the Orokin Empire. The explorers from the Entrati family were studying the Void and gathered all the information and relics they were finding there in special vaults. However, now when the Deimos belongs to the Infested, these Isolation Vaults became one of the main targets for different travelers and adventurers that want to lay their hands on the ancient relics stored there. The Mother of Entrati will provide you with different tasks that will lead you to one of the facilities called Isolation Vaults.

Isolation Vaults Bounties can be got from Mother. There are 3 Tiers of these tasks in total. The first tier Vault is the easiest, the third tier is the hardest. You will need to complete them all to unlock the next tier. Isolation Vault consists of 3 stages.

RELATED: How to Find and Kill the Sisters of Parvos in Warframe

The first stage will demand you to open a giant infested door. You will need to gather the Residue of a dead snake-like giant Infested. It can be Fass or Vome, depending on the current Cambion Drift’s cycle. Then you should bring around 6-12 Residues (based on the number of players in your party) to the Bait Station. You will need to protect it from the Infested for 90 seconds, as the station attracts them. Then the machine will convert Residue into the Concoction and you will be able to feed the infested door with it.

The second stage will be in the underground depth of infested caves. Here you will face a high level of toxicity in the local air. You will need to kill special infested that will spawn around to decrease the level of toxins and survive for 90 seconds.

The third stage will be available after you survived the toxic area. Now you can enter the Vault and face its boss. You will have to fight 1-3 Necramechs the number of which is based on the tier of your current Bounty. Defeating the Necramech is not a simple task, and these old war machines are always formidable opponents. But, after that, you will be able to get your reward and complete the Bounty.