Home Guides What is the Torch God in Terraria? Answered 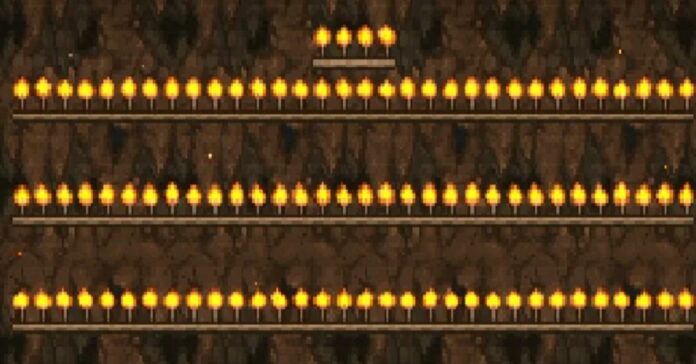 Along with pylons, the event of the Torch God in Terraria was introduced sometime after the release of the final major update 1.4 Journey’s End. Let’s see what it is and who is the God of Torches in Terraria.

Some time ago, Terraria had a system of unlucky torches: if you placed a torch in a biome that was not suitable for it (a snow torch in the jungle, for example), the game punished you for this by lowering the hidden luck indicator.

After a couple of patches, the developers removed this mechanic since it was limiting players a lot. Matching torches still raise luck, but the wrong ones don’t lower it. As an easter egg to this, the authors introduced a secret event of the Torch God in update 1.4.0.5.

How to Start a Torch God Event in Terraria

To start a Torch God Event in Terraria, just place more than 100 torches within a single screen. This should be done at least 200 blocks below the surface. Then you will see the following message:

The Torch God is haunting Terraria!

When this happens, all torches nearby will start shooting fireballs at you. In this case, the fired-off light sources will go out, signaling how long you still have to survive until the event ends. No special monsters will span, but normal ones will still be active.

During the event, you will be given the Blackout debuff, severely reducing the brightness of the lighting. It is recommended to use potions of light so that you do not have any special difficulties in movement.

In addition, it is recommended to prepare the arena by making it an empty space with freedom of movement. You never know which torch will fire next, so maximum mobility is the key to success. For example, you can fill a room with wooden platforms. High armor ​​will also seriously increase your chances of survival.

When the last torch goes out, after a short period of time the lights will turn on again, and a Torch God’s Favor item will drop nearby.

You can safely use it immediately after picking it up. By doing this, you will receive a new ability that can be turned on and off on the panel next to the inventory.

When the ability is active, when placing any torch, the game will always change its appearance to the type that corresponds to the biome in which you are located. This, in turn, will add a small bonus to your luck. Nice ability, isn’t it?

This is everything you should know about a Torch God in Terraria. We also have guides on obtaining mana flowers and all pets available in this game.