Home Guides Terraria: How to Get a Rainbow Gun 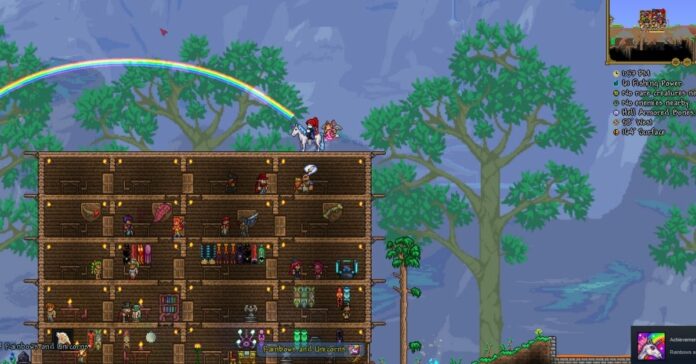 The Rainbow Gun in Terraria is a post-Plantera Hardmode magic weapon. It shoots a rainbow that moves in a straight trajectory for a short time and then travels with a curved line trajectory. It creates a rainbow arc. This rainbow arc will stay for 20 seconds or it will be removed after another shot will be executed. Any enemy that touches the rainbow will be damaged.

How to Get a Rainbow Gun in Terraria

The Rainbow Gun in Terraria may be obtained in the Dungeon. You may find it in the Hallowed Chest which must be unlocked. In order to do it, you have to use one of the Hallowed Keys.

RELATED: How to Get Beetle Armor in Terraria

To get the opportunity to obtain the Rainbow Gun you will need to move into a Hardmode and defeat Plantera. It is not the most simple boss to defeat. Prepare your character well for this fight.

Rainbow Gun in Terraria is a magic weapon. It fires with rainbow lines that create an arc-like trail. It deals damage to opponents.

RELATED: How to Make a Sawmill in Terraria

The best modifier for the Rainbow Gun is Ruthless. You will use this weapon to create an arc but then it is better to switch for another weapon. It is the best way to use it as the arc will disappear after you will shot another one. The important thing is the mechanic of critical-hit chance. All projectiles that were created or fired by your character and are still active will use the critical-hit chance of the weapon that you hold in your hands right now. So it is better to have the biggest amount of damage stat with your Rainbow Gun and then switch for another weapon with great crit-chance. Using the Rainbow Gun this way will maximize its damage.