Super Smash Bros. Ultimate has been released almost a year ago worldwide, and the game today is much different from what it was at launch, thanks to the steady support provided by Masahiro Sakurai and his team. New characters have also been released, and another one will be coming in one month.

The next Super Smash Bros. Ultimate DLC character is Terry Bogard from the Fatal Fury series. The character has been revealed last month, and today Nintendo reconfirmed that the release is still set for November. A precise launch date, however, has yet to be confirmed.

Super Smash Bros. Ultimate received, so far, four DLC characters – Piranha Plant, Joker, the Dragon Quest Hero and Banjo-Kazooie. All four characters come with unique movesets and one of them with a bit of controversy. The Dragon Quest Hero is powered by RNG mechanics which can make the character extremely powerful, maybe a little too much. Like it was for Bayonetta in Super Smash for Wii U, some are trying to ban the character from tournaments, as he is considered extremely unbalanced. 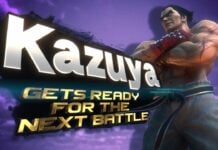