The new presentation focused on the popular Nintendo Switch exclusive will be aired tomorrow, July 30th, and it will feature none other than director and series’ creator Masahiro Sakurai.

With the next DLC character, the Dragon Quest Hero, slated for a Summer release date, it’s about time we learned about its release date. We may also be getting additional details on Banjo-Kazooie as well as additional content coming in the future.

On a related note, the Super Smash Bros. Ultimate 4.0 update is going to be released soon. According to reports, replay data will be incompatible with the new version, so balance changes will be in. 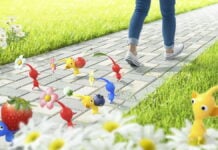