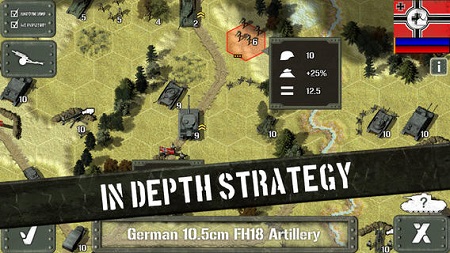 If you haven’t had enough of the Tank Battle games, you will be happy to know that another game of the series is now available for purchase on the App Store. Start doing some maintenance work on your tanks, you’re really going to need them in Tank Battle: East Front 1944.

Tank Battle: East Front 1944 is set, as the name clearly implies, in the East Fron of World War II during 1944, with the Soviets retreating and the Germans following them into Mother Russia. The game allows players to play as both Soviets and Germans, with each campaign including eight full missions.

Even though the total number of missions seems a bit low, the game offers quite a bit of variety to make up for it. You’ll find some capture the key missions, protect the convoys and more. There’s going to be a few destroy your enemies objectives, so don’t worry if you just want to defeat your enemies without having to worry about anything else.

If you have someone else to play with, you’ll be happy to know that Tank Battle: East Front 1944 also include two multiplayer missions that can be played on the same device.

Tank Battle: East Front 1944 is now available for purchase on the App Store.