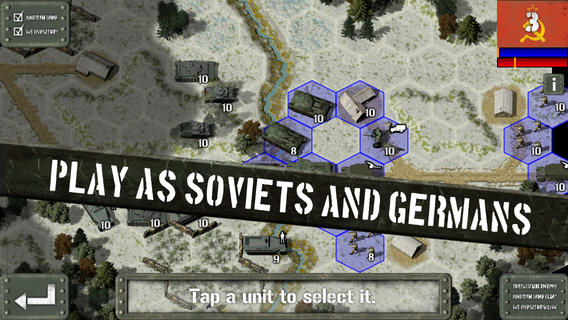 The sequel to Tank Battle: North Africa has finally been released on the App Store, allowing gamers to use their own tanks once again in battle.

Tank Battle: East Front 1941 clearly has a different setting than the previous game, focusing on the German invasion of Russia. This doesn’t mean that everything has changed, since you will have quite a lot of tanks to use in battle.

Tank Battle: East Front 1941 playes not too differently from the first game. The main portion of the game is till played on a map made of hexagonal tiles. The UI, however, has been polished and graphics look quite better overall.

Interestingly enough, the main campaign, made up of 16 missions, is split into two, allowing gamers to play as the Germans in the Blitzkrieg part and as the Russians in the Desperate Defence part. The single player campaign is also made more varied by the missions, which feature several different objectives to complete. The different areas used as setting for each mission will also force gamers to come up with different strategies in order to win.

As if all this wasn’t enough, Tank Battle: East Front 1941 also includes a two players mode which allows two gamers to play with a single device.

Tank Battle: East Front 1941 is now available for download on the App Store.