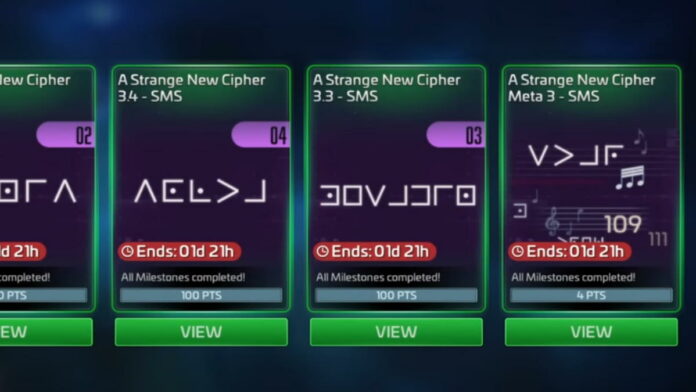 Much like last week’s “A Strange New Cipher” puzzle event, this week features a brand-new cipher for players to decode and figure out. The basic rules are the same: players are given a seemingly simple image that contains a hidden star system within, and the only way to find out the star system is to crack the cipher.

Last week’s cipher event focused on the western musical notation system, and it led to an interesting puzzle experience where players had to basically learn how to read sheet music.

This time around, the cipher is based around the Pigpen cipher, also known as the Masonic cipher or Freemason’s cipher. It’s a fun and geometric cipher that’s relatively easy to crack, so it’s often used in popular media.

First, we’ll explain the Pigpen cipher. Imagine a tic-tac-toe grid, as this will be the basis for the first set of letters in the cipher. Each letter in the alphabet corresponds to a spot in the grid, and little dots are added when there is no more space on the grid.

This covers 18 letters, but what about the remaining 8? The grid then turns into an X, and four letters take each quadrant. The little dots return that match the remaining 4 letters, and that’s the whole cipher! Here’s a graphical image to help you understand.

Now, let’s apply this cipher to the first puzzle, “A Strange New Cipher 3.1”. It’s a short, five-letter word, so it’s a great place to apply your new-found knowledge.

The first and fourth letters are D, while the second and fifth letters are O. The third letter is N. This spells out DONFO, so head to that system and take out the targeted hostile there to complete the mission.

And that’s it! You now have all the knowledge you need to complete the other ciphers. If you don’t want to solve them yourself, here are all the answers:

That concludes our Star Trek Fleet Command: “A Strange New Cipher 3.1” answers guide. If you have any other questions, feel free to let us know in the comments below!