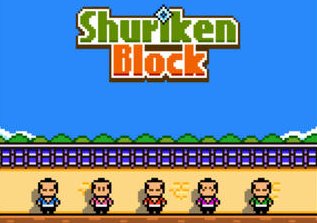 From the creator of the insanely popular Flappy Bird and Super Ball Juggling, we have Shuriken Block, a game just as frustrating and fun as the previous two – although it’s probably the easiest of the bunch and one that gives you three times per level. We are here to share with you some Shuriken Block cheats: a set of tips and tricks, actually, that will hopefully help you save those samurais from the Shuriken and get you a nice high score in return.

So if you’re finding it difficult to get far in the game, read our Shuriken Block tips and tricks below – maybe it will help!

1. Be rested when you play
I started playing Shuriken Block after Flappy Bird, when I was already tired and angry. As a result, I considered Shuriken Block the most difficult and annoying game ever. When I decided to give it a second chance, a couple of hours after my first try, I managed to get to 200 points. So being rested when you start to play is key here!

2. Tap the blue fence
The blue fence (or whatever that is) above the samurai is where you need to tap. It’s a great indicator and it’s always there. Nothing else is of interest to you when it comes to tapping.

4. Tapping early is better than tapping late
If they usually say that it’s best later than never, they haven’t played Shuriken Block. If you manage to hit the shuriken exactly on the blue line, you will get 10 points. But you don’t really need that, you need a run that keeps going and if you tap slightly earlier, you will still block the shuriken, but get fewer points. Again, it’s best to get fewer points but go on a neverending run instead of going for the maximum amount each time and losing.

5. Cheat playing the game in multiplayer
Things got really good for me (almost 1,800 points) when I brought it a friend. We numbered the samurai from 1 to 5 from left to right and his job was to watch the shuriken that were being launched, while I was focusing on the falling ones. So if he said “two”, I would prepare to tap above the second samurai, and so on. It’s a job that is a lot easier, but takes a little time to get used to this since at first you will be tempted to move to the indicated samurai before hitting the previous shuriken. But with a little practice, you will get far.

So these would be our Shuriken Block tips and tricks for now. If you have other suggestions to share with fellow players, let us know by commenting below. And don’t forget to tell us your high score!