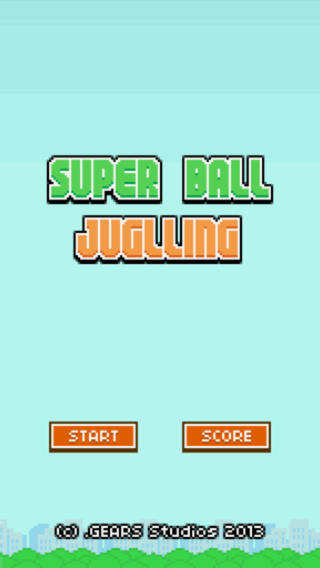 Super Ball Juggling can almost be considered as a sequel to the successful Flappy Bird for a few reasons. Not only the game has been developed by the same team but it also features a similar graphical and gameplay style. This means hours upon hours of fun with a bit of frustration thrown in if you want to reach some insanely high scores.

Super Ball Juggling can be at times even more frustrating than Flappy Bird so take this into consideration when playing the game for a long time. There are a few simple tricks that you can follow to make the experience less frustrating but if things are pushed too far, just stop playing the game and pick it up again after a while. Your brain and your nerves will definitely be grateful for this.

Super Bar Juggling’s experience is all about timing. Depending on when you tap the screen, the ball will react differently. Even though it may seem the ball’s height is completely random, it isn’t: learning to control this will ease a lot of frustration coming from unexpected juggles. For starters, you will be able to hit the ball as soon as it falls right above the head of your character: tapping before this will make you miss. If you want a bit longer to tap and hit the ball, it will raise higher, giving you more time to get ready for the next tap. Learning to control all this is going to make you go quite far.

Quite a few gamers have been using a really simple trick to get some high scores. It’s quite funny that this trick pretty much turns the game into a multiplayer experience that’s quite engaging. To perform this trick, you will have to play the game with another player, with each player taking care of a single side. This means that they only have to focus on one of the sides. There’s a catch, though: both players need to be good at the game and know how to control the height of the ball. This may seem a bit like cheating, since the game is meant for a single players, but the possibility is out there and the game becomes even more fun when two experience gamers try to get the highest possible score.