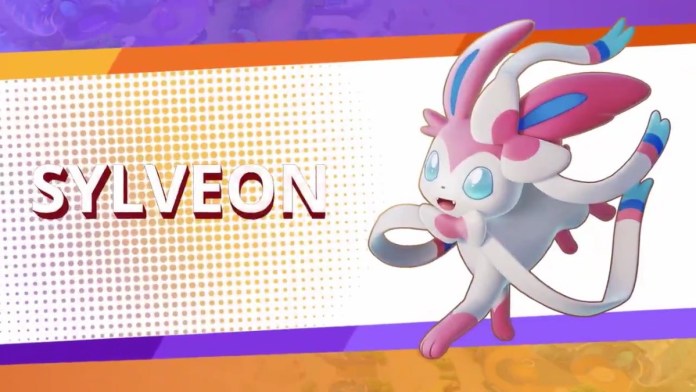 Sylveon is the newest Attacker to be added to Pokemon Unite. They are simple for players to use while at the same time being powerful damage dealers. Sylveon can be purchased in the shop using currency earned in-game or paid currency. Here is everything you need to know about how to use Sylveon in Pokemon Unite.

Eevee has the option to begin the match with Swift, which is a simple damage-dealing ranged normal type move, or Baby-Doll Eyes, which is a damage dealer with a few more debuff effects. The one you don’t pick it will get at level two, so either move is fine to start with.

When they become Sylveon at level 4, they can either learn Mystical Fire or Hyper Voice. Mystical Fire is a damage dealer that is a set of four flames that hit enemy Pokemon one by one. In addition, it temporarily decreases the targets special attack when they hit. When a hit is successful, it will also decrease the move’s cooldown. We recommend choosing Mystical Fire over Hyper Voice just because Mystical Fire’s mechanics have more universal use. Mystical Fire works especially well for a player who would prefer to spend a match jungling the wild Pokemon.

At level 6, you can choose between either learning Draining Kiss or Calm Mind. Draining Kiss is a move where an air kiss will bounce back multiple times between the user and the enemy. After the kiss returns to the user, it will restore some HP. When the kiss touches the enemy, it will damage them and temporarily reduce its moving speed. Calm Mind is a support-based move where the user will temporarily increase their special attack, special defense, and moving speed. When upgraded, the move has an ability where if a Pokemon hits Sylveon while they are using it, they won’t do any damage and Sylveon will gain a temporary shield. Overall we’d recommend picking Calm Mind, as its support mechanics are just too helpful compared to the much more bulky Draining Kiss.

Sylveon’s Unite Move which they get at level 8 is called Fairy Frolic. They will jump into the air where they will become temporarily invincible and do area of effect damage to any opposing enemies within range once they land. They will also restore HP. After that, Sylveon will get a temporary buff where any damage they do with normal attacks will be converted into HP.

The Buddy Barrier is the perfect item choice to equip your Sylveon with. This item grants a shield to them and a pokemon ally with the lowest HP that has 40 percent of their max HP.

Muscle Band will increase damage done by 3 percent of the opposing Pokemon’s remaining HP. It’s an item that’s easy to get and can work if you’re new and don’t have all the items yet.

The Shell Bell matches really well with Sylveon’s powerful moves like Mystical Fire that have heavy cooldowns because it decreases attack cooldowns.

Full Heal will protect you from status conditions and create a temporary immunity to hindrances.

For an easier time farming, you can use Fluffy Tail to temporarily stun wild Pokemon and increase damage done to them.

Eevee and Sylveon’s basic ability is very similar. The more attacks Eevee does, the more their damage will increase every three attacks. For Sylveon it’s the same thing except it will get a speed increase when it hits.

Another ability they have as Sylveon is Pixilate, where every time they do or receive damage, special attack and special defense will temporarily increase.

How To Play As Sylveon In Pokemon Unite

Sylveon is valued for its ability to able to spit out heavy attacks while lacking the faults that the more brawny Pokemon have. They can hit hard and get away very quickly in an assassin-style way. Something that makes Sylveon unique from every other battler is that they can attack while scoring points. This in turn potentially protects them from getting knocked out depositing points, a challenge that many players run into. Use Sylveon for jungling, rack up their stats from farming the wild Pokemon in the process, and then use those active buffs to help repel anybody who attacks.