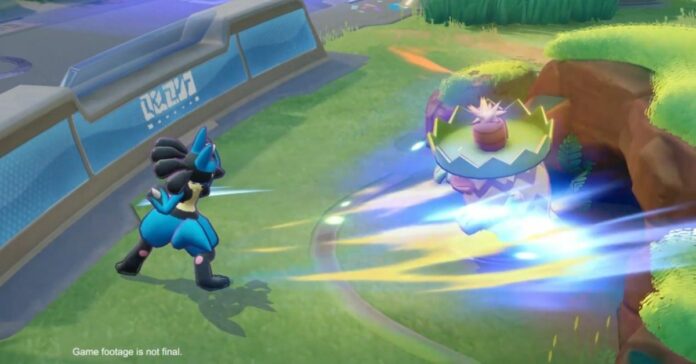 Lucario in Pokémon Unite is an All-Rounder with an Expert Difficulty. It is a short-range attacking type of character that has a good potential to initiate a teamfight.

How to get Lucario in Pokémon Unite

To obtain Lucario in Pokémon Unite you will be needed to buy a Unite License. It cost 10,000 Aeos Coins or 575 Aeos Gems. Once you bought it you will be able to use this character.

Lucario in Pokémon Unite is a good frontline fighter and its abilities give you mobility, crowd control, and some survivability. Also, it does a pretty nice amount of damage.

Lucario’s Basic Attack boosts each of your third attacks knocking back your opponents. The other passive ability is Steadfast. It increases your Movement Speed and grants a shield when your character has low HP.

At level 1 you need to choose one of two abilities, Quick Attack and Meteor Smash. The ability you didn’t choose will be obtained at level 3. Quick Attack allows you to lunge forward and deal damage to opposing Pokémon. Meteor Smash strikes forward, deals damage, and knocks your opponents. Meteor smash is useful at the beginning of the match as it deals more damage and grants you additional crowd control. So it is recommended to choose this ability first, while mobility obtained with Quick Attack might come into use later.

At level 5 you will be needed to replace your Quick Attack with either Extreme Speed or Power-Up Punch. Extreme Speed is an instant dash that deals damage and, if you hit your opponent at point-blank range, heals you and resets its cooldown. The reset and heal won’t work more than once if you use Extreme Speed on the same opponent. Also, it temporarily increases your Attack when upgraded at level 11. Power-Up Punch is a dash that increases its range and damage with further charging. The next basic attack becomes boosted after you dashed. While preparation of Power-Up Punch, Lucario moves slower and takes less damage. Also, this ability deals additional damage based on the enemy’s missing HP. At level 11 it also gives you immune to hindrance while charging. Power-Up Punch is the better choice as it gives you more damage, survivability, and stacks up with your Unite Move.

By reaching level 7 you will be allowed to replace Meteor Smash. The first variant is Bone Rush. It performs a combo attack with bone, deals multiple blows, shoves your opponents, and throws the bone away. If used again after you sent your weapon fly, Lucario rushes to its location and deals additional damage. After upgrade at level 13, resets the cooldown of your dash ability. Close Combat is the second option and it does pretty much the same thing but hits with Lucario’s fists. Also, it doesn’t throw any bones and gets its damage increased with the level 13 upgrade. Choose the one you like more. Bone Rush is recommended for its mobility and the fact it makes your character more versatile, while Close Combat simply does more damage.

RELATED: When Will Pokemon Unite Release on Mobile Phones? Answered

The Lucario’s Unite Move is Aura Cannon. It throws forward a big energy ball that deals damage to your opponents. Also, it increases the damage of your next Power-Up Punch.

Lucario in Pokémon Unite is a versatile and mobile character and items should increase your damage and mobility. The recommended choices for Held Items are:

As a Battle Item, the Eject Button will be a great choice. It gives you some additional mobility and the opportunity to engage or disengage combat.

Lucario in Pokémon Unite is quite a difficult character to play. It demands a good reaction and understanding of the game as your survivability is mostly based on your positioning. But if you learned how to play this character, you will be welcomed in any team as Lucario brings good options to distract your enemies and end the teamfight before it started.

This is everything you need to know about Lucario in Pokemon Unite. While you are here, take a look at our guide on Slowbro.