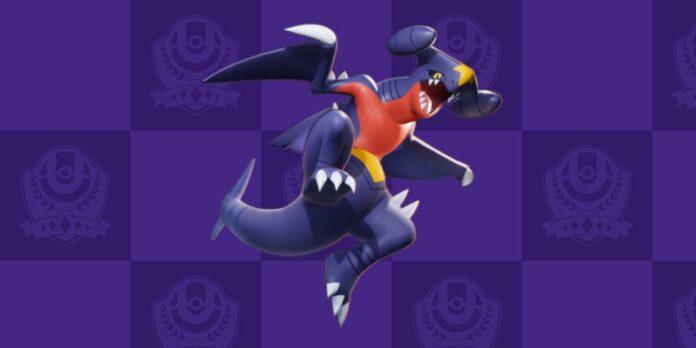 Garchomp, the fierce and mighty dragon Pokémon, is here in Pokémon Unite! Garchomp brings ferocious offense with unpredictable speed thanks to its dash-oriented moveset, so it’s a real force to be reckoned with. Garchomp has a lot of fun and high speed builds to utilize, and we’ve got the strategies for you here in our Pokémon Unite Garchomp build guide for the best moves, items, and more!

How to get Garchomp in Pokémon Unite

Garchomp can be acquired from the Unite Battle Committee for 10,000 Aeos Coins or 575 Aeos Gems. Unfortunately, as of now, there are no events that reward you with Garchomp’s unite license for free, though that may change in the future. Be sure to keep an eye out for upcoming events!

Garchomp is a melee all-rounder that excels at going toe-to-toe with melee opponents. Its passive Rough Skin reflects any physical melee damage taken back to the aggressor, and every 5th basic attack does extra damage and heals Garchomp. Garchomp’s move set also allows it to deal with pesky ranged opponents as well.

Garchomp’s first basic move is Sand Attack, which hurls sand in the targeted direction, blinding and slowing any enemy caught. Garchomp’s movement and attack speed are increased temporarily after it hits. This move morphs into Dig or Dragon Rush.

Dig is a directional dash that damages and throws enemies. This move can be used to safely engage a battle without worrying about stuns, enabling your teammates to get in some good damage. You can also use it as an escape, as Garchomp is completely invincible for the duration of the dig. Take Dig if you need a good initiating move or if there are mobile enemies, as you can use it to catch them off guard.

Dragon Rush, after a short wind-up, propels Garchomp forward, shoving any enemies out of the way. You can use this to dive the enemy team, and you can also chain it with Dragon Claw to create a powerful dash attack.

Garchomp’s second basic move is Bulldoze, an area of effect shockwave that damages enemies around Garchomp. This move morphs into Earthquake or Dragon Claw.

Earthquake is basically a better version of Bulldoze, dealing more damage to nearby enemies. The upgraded version also slows down enemies.

Garchomp’s Livid Outrage unleashes a powerful combo attack in the targeted direction. The final hit throws enemies but also stuns Garchomp, so careful timing of this move is required to not immediately get blown up after. Follow up a stun from Dig or from a partner to create the safest opportunities to use this unite move.

Dragon Rush / Dragon Claw – This is one of Garchomp’s go-to builds, as it’s the purest example of Garchomp’s playstyle. Garchomp likes to go head-to-head with its enemies, so using Dragon Rush and then Dragon Claw for a powerful dash attack lets Garchomp get to where it wants to be with relative ease. Just be careful though, as since you’re blowing both of your moves at once, you will have nothing to fall back on, so you have to commit to this combo.

Dig / Dragon Claw – Ultimate bullying combo! Initiate fights with Dig to throw your enemies, then follow up with Dragon Claw to shove them around even further. This combo is great for enemies that require careful positioning, as you can throw ’em around like they’re play toys!

Muscle Band increases the amount of damage against enemies with high HP. The Muscle Band lets you take down defender-type Pokémon easier.

Float Stone increases movement speed when you’re out of combat. This is a universal must have item if you’re playing as a pure jungler.

Slow Smoke slows nearby enemies. Can be useful for keeping enemies in your sights as you’re waiting for your cooldowns.

X Speed is great for catching up to enemies that are trying to escape your claws!

X Attack is good for when you need a little more power into your attacks to burn down high priority targets faster.

Do you have any other recommended build ideas for Zeraora? Let us know in the comments below!