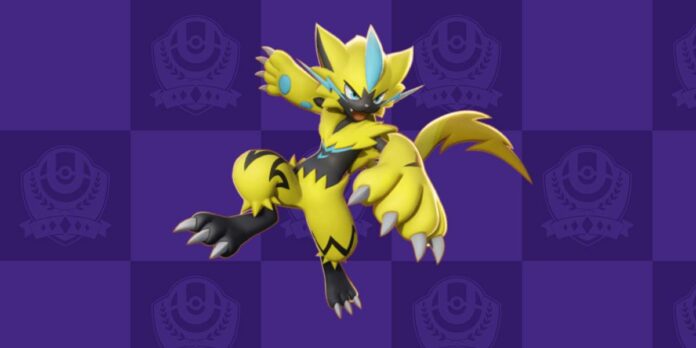 How to get Zeraora in Pokémon Unite

Gettinng Zeraora in Pokémon Unite is actually very simple: all you need to do is log into the game before August 31. Check your in-game mailbox for a “Launch Bonus” letter to receive Zeraora for free! If you don’t claim Zeraora within this time, you’ll have to buy their unite license from the shop.

Zeraora is melee speedster that excels in chasing down foes and staying in the fray. Its passive Volt Absorb allows it to deal more damage as it receives it. Zeraora’s every 3rd basic attack also deals bonus damage, stuns, and even grants self-healing, so you want to go all-in as Zeraora.

Volt Switch is basically an upgraded form of Agility, with the added bonus of being able to immediately dash back to Zeraora’s origin point right before it used the move. Take this move if you need to stay mobile to avoid getting locked down by a team with lots of stuns and crowd control.

Spark enables Zeraora to stick to its targets like glue because it can be used three times before going on cooldown. If you’re going up against agile but squishy targets, this move might help you secure kills on targets that would have otherwise gotten away.

Zeraora’s second basic move is Slash, which makes Zeraora pounce on the targeted enemy, dealing damage and throwing them at the end. This move morphs into Discharge or Wild Charge.

Discharge releases a shockwave around Zeraora, damaging all enemies nearby and granting Zeraora a shield if it hits. Discharge will also pull in enemies if they’re paralyzed, damaging them once more and also stunning them. This combo is particularly nasty and can easily secure a kill, but you need to make sure your target is paralyzed by your 3rd basic attack before you use it. Discharge is great if the enemy team likes to clump together, letting you hit them all at once.

Wild Charge makes Zeraora charge in the targeted direction, unleashing a flurry of attacks to the first target it collides with. This move also deals damage to Zeraora, so take care when using it. This move is stronger if you use it on a target that has been previously hit by Volt Switch, Spark, or a 3rd basic attack, so make sure to combo it! Wild Charge is useful for catching fragile and mobile targets, or if you’re paired with a partner Pokémon that has reliable stuns and slows.

Zeraora’s Plasma Gale blasts enemies with lightning, dealing damage and throwing them. It also creates a zone where Zeraora’s basic attack range and damage is increased. It’s usually a better idea to open up a fight with this move, as you can take advantage of the empowered basic attacks for more paralyzing opportunities. Just make sure not to dive in too fast, as sharp-eyed players will look for this Unite Move and try to focus you down with stuns and slows.

Float Stone enables Zeraora to get around the map quicker when it’s out of combat. This is a must for speedy jungling and setting up ganks, which Zeraora is the king of.

Muscle Band increases the amount of damage against enemies with high HP. The Muscle Band is an absolute must as it will enable you to take down defender Pokémon, which are dangerous targets for Zeraora as they often have hard stuns.

Attack Weight permanently increases your attack power upon scoring a goal. Many trainers play Zeraora as a jungler, and as such you’ll be farming a lot of energy. The Attack Weight takes advantage of all the scoring you’ll be doing to turn Zeraora into a late-game nightmare!

Goal-Getter is a must if you’re running Attack Weight, as it temporarily speeds up your scoring speed.

Eject Button lets you instantly teleport to a targeted nearby location. This is universally one of the best battle items to take since it can get you out of a tight spot, so take it whenever you can’t think of anything else better to take.

Do you have any other recommended build ideas for Zeraora? Let us know in the comments below!