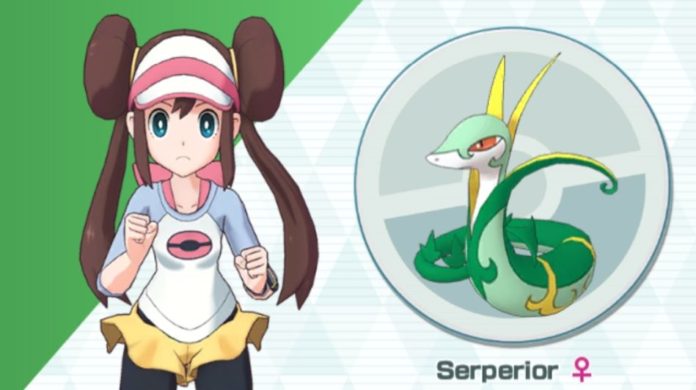 Rosa is the only guaranteed 5-star trainer that you’re getting in Pokemon Masters. We’re actually talking here about the Rosa / Snivy Sync pair and we’re going to talk about them in today’s article.

First of all, it’s worth mentioning that Rosa’s pokemon in Pokemon Masters can evolve, following this line: from Snivy to Servine and from Servine to Serperior. You can learn more about Pokemon evolutions here.

Now let’s get back to Rosa in Pokemon Masters and check out everything there is to know about her and her pokemon!

This Sync Pair is a support-type of Grass type. This makes the team weak against Flying type Pokemon.

The fact that Snivy is one of the relatively few Pokemon in the game that can evolve comes as an added bonus. We’re also talking about changing the sync move from the Grass Sync Beam (which is seen at others) to a more interesting “Shoot for the Stars Leaf Storm” which deals a ton of damage to an opponent.

Rosa herself is a solid trainer with a good Special: Time to Energize is great to have in any team as it fills the Move Gauge by 2 units.

Serperior’s giga drain (which is a move that the previous to forms have as well) is good at keeping the pokemon alive by leeching health from opponents.

If you look at their skills, you notice that this is a Sync Pair that doesn’t deal a lot of damage and unfortunately Serperios is really slow too.

But they make up for this by being one of the best Sync Pairs in the game in terms of Health and Defense and they currently tank #1 for Sp. Defense. So definitely some good things here!

Being a 5-star Sync Pair that you unlock for free, I think that it’s safe to consider her one of the best trainers and options in the game for free to play players. She’s on top of our list of best sync pairs in the game, but also on our team composition guide for f2p players.

In other words, she’s really good, all things considered.

Yes, her pokemon is slow and doesn’t deal a ton of damage, but with a couple of good moves and thanks to their bulky nature, this Sync Pair remains one of the best choices in the game for early moments as well as long term.

This means that she can become an important part of any team and you can safely invest in leveling this sync pair to the maximum: you’ll definitely use them a lot as your main support in the teams.

There might be better options out there for creating an ideal team that deals a ton of damage, but that’s probably an option for those who will spend some real life money on the game. If you don’t plan to do it (or if you plan to keep spending as low as possible), Rosa is clearly one of your best options.

What do you think, though? Do you like Rosa in Pokemon Masters? Do you think she’s an useful character or you have other preferred Sync Pairs?