Persona 5 Scramble is releasing soon in Japan on Nintendo Switch and PlayStation 4, but players will be able to get a taste of the game a little earlier than anticipated.

The Persona 5 Scramble playable demo, which has been confirmed today during the latest Morgana’s Traveling Report, will be released on February 6th on the Japanese eShop and PlayStation Store. While the demo is only going to be available in Japanese next month, both the Nintendo Switch and the PlayStation 4 consoles are region free, so players will be able to download and play it no matter their region.

Persona 5 Scramble will be a rather different game than Persona 5 and the other previous entries in the series. Gone is the turn-based battle system, replaced by a full-on action experience.

Despite these changes, many other gameplay mechanics made the jump without any major overhaul, such as Persona Fusion, which allows players to create new Personas and customize their skills with Skill Cards, also returning from previous entries in the series.

Persona 5 Scramble launches on Nintendo Switch and PlayStation 4 later this year. The game releases in Japan next month.

Persona 5 Scramble Looks Better Than Ever In Brand New Trailer 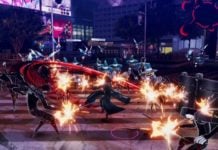