One Piece is one of the most popular animes of the last 20 years, but there’s been a lack of solid games based on the franchise. The best of them is undoubtedly One Piece Pirate Warriors 3, which has been released a few years back on PC and consoles.

As the manga and anime are still proceeding, and show no sign of stopping, it only makes sense to continue telling the story of the Straw Hat Crew with another entry in the series, One Piece Pirate Warriors 4, which has finally received its first gameplay trailer.

The new trailer, which can be found below, showcases Luffy, Sanji, Jimbe and a few other characters as they unleash some brand new special moves.

The new One Piece Pirate Warriors 4 trailer also confirms that the game will include a chapter dedicated to the Whole Cake Island arc, where Luffy and the rest of the crew traveled to take back Sanji into the crew. Big Mom, as well as the Vinsmoke family, will make an appearance as playable characters.

Not much else has been said about returning playable characters, but we should expect all of the series’ main characters to come back with brand new moves and combos as well as all of the major villains that have been defeated by Luffy and his crew.

One Piece Pirate Warriors 4 launches on Nintendo Switch as well as on PC, PlayStation 4 and Xbox One sometime next year. 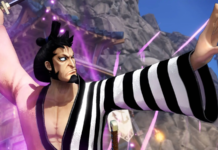