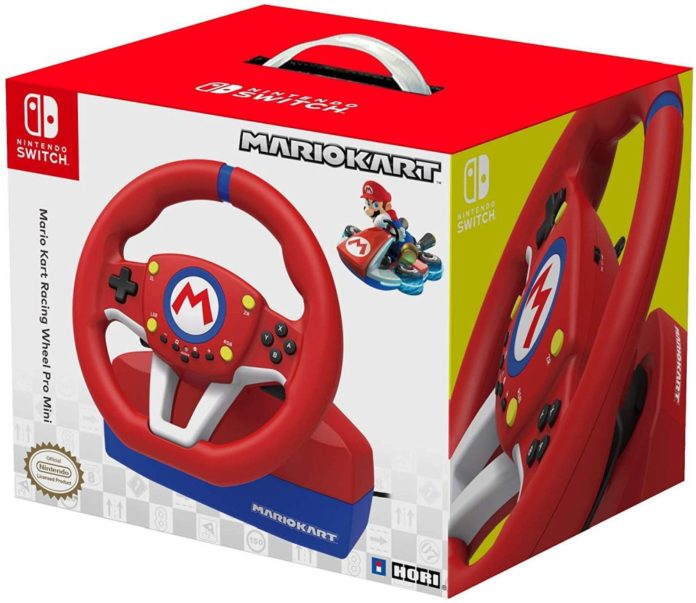 HORI is a name that most gamers know, as it is the manufacturer of many excellent console peripherals and special controllers. The company also worked on Nintendo Switch accessories and released not too long ago in Japan an official Mario Kart racing wheel for the Nintendo console to be used in Mario Kart 8 Deluxe and other racing games. This unique controller is also coming West very soon.

A new Amazon listing that has been live only for a short while confirmed that the Mario Kart racing wheel will be released in North America on November 12th. European players will have to wait a bit longer, as it will be released only in January.

Hori is pleased to announce the Nintendo Switch Mario Kart racing wheel Pro. The racing wheel is ideal for the Mario Kart and racing gamer. The ergonomic wheel design, pedals, and convenient on-board controls were built to create an authentic racing simulation. Officially licensed by Nintendo.

Mario Kart 8 Deluxe is the latest entry in the long-running series by Nintendo, and one of its finest yet.

While the base game is essentially the same of the vanilla release, launched on Wii U a few years ago, Mario Kart 8 Deluxe is an essential purchase for all Nintendo Switch owners, as it features all of the content released for the Wii U version of the game as well as some improvements, such as Battle Mode improvements and more. With the release of the Mario Kart racing wheel, players looking for an authentic experience will finally be able to have one.

The Mario Kart racing wheel will release next month in North America and in January in Europe.