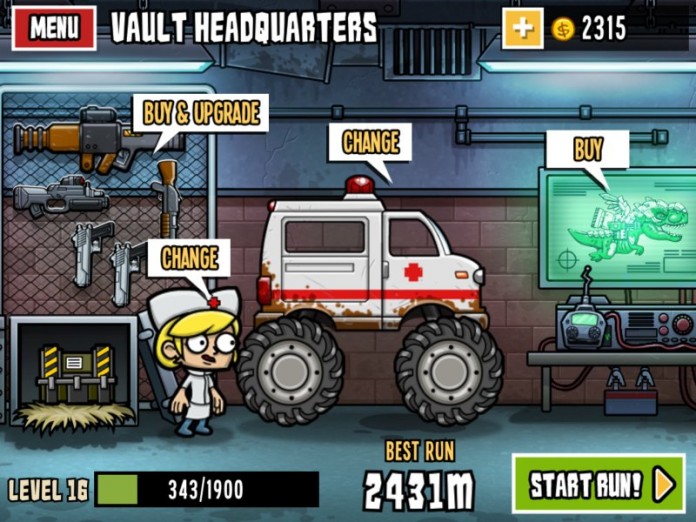 I have recently shared with you some Nuclear Outrun tips and tricks, but I never got the chance to actually tell you more about this insanely addictive game. So let’s right all the wrongs and find out more about Nuclear Outrun for iPhone and iPad in this review!

I would dare to call Nuclear Outrun a side scrolling endless runner, but if you play the game you soon find out that the “endless” part is extremely relative. In theory, you have 30 seconds until a nuclear missile hits and your job is to drive as far away as possible to survive the blast. But as if the nuclear missile itself wasn’t enough, you also have a horde of zombies that try to slow you down, flying robots shooting at you and white unicorns pooping coins. Yup – a complete set of maddening fun!

During your “runs” you find other survivors and try to rescue them. The nice thing is that these survivors will then join your ranks and you’ll be able to use them as the designated driver, each bringing a unique bonus to the table. You also have the option to spend the coins you collect throughout the game on brand new vehicles, weapons (like the fart bazooka or the shark gun, to name a couple of the funniest) and off you go! 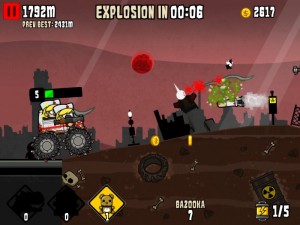 Driving wise, you don’t have to worry as your selected character will do the driving for you. All you have to do is to make sure that you shoot down all the obstacles (as in zombies, couches and robots) out of the way so that you can run as far away as possible. And as I said, that’s not going to be too far, unfortunately. But you’re going to keep trying, because this is the nature of the gamer and we’re pretty lucky that Nuclear Outrun is a really well made title.

The sound is absolutely brilliant, especially the tune in the main menu. Because you will probably be close to losing your mind in frustration and ready to rip your eyeballs and chew them, the menu welcomes you home with a smooth, relaxing music. Of course, it doesn’t manage to deliver any music therapy to your soul, but it’s really funny if you think about it. Visually, Nuclear Outrun looks more like a side scrolling flash game, which means that the focus wasn’t really on the graphics, but we can’t complain about them either and in this situation, they work perfect with the setting.

All in all, Nuclear Outrun is a little gem of a game that you can play for free on your iPhone or iPad. It follows the same patterns of other games in the genre and except for the good sense of humor, doesn’t bring much to the table. But why change something that works flawlessly? 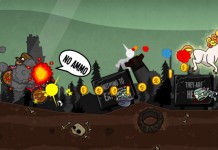