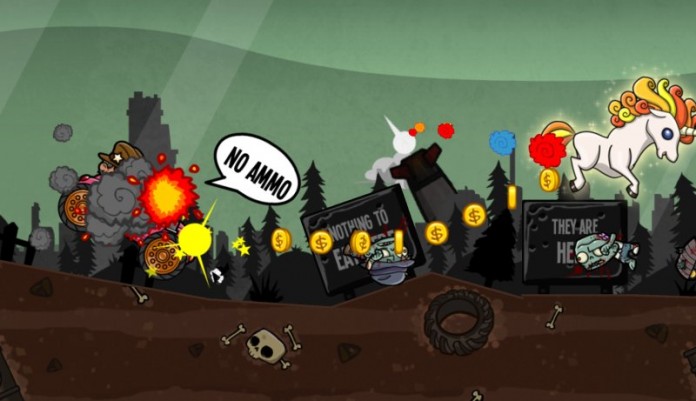 Nuclear Outrun is a brilliant game! And before you head over and check out our review of the game, let’s read first some Nuclear Outrun cheats, tips and strategy advice in order to help you stay alive for as long as possible, rescue as many survivors and keep your vehicle around.

Please note that these Nuclear Outrun cheats and tips are for the mobile version of the game, but they will probably apply to all other versions as well.

Even though there is not much to talk about in terms of strategy and ultimately most of the success of your run is based on your own skill, there are some tips and tricks that might help you get better runs, and that’s exactly what we have below, for both new players to the game as well as veterans.

I was lucky enough to get a female survivor pretty soon (the Cheerleader), so my choice for a new vehicle was pretty obvious: The Lady.

With a speed of 52 and armor of 14 (with female driver) it is the best choice for a vehicle until you can afford the Ambulance.

My advice? Ignore the Black Bolter, the Road Hog and the Camping Van as they are a waste of valuable coins.

Based on my experience, the shotguns are the best weapons to have with you, followed by the Bazookas. I had no real success with the handguns, rifles or the strange looking Squid Launcher.

Therefore, I would suggest first buying the Shotgun and the Bazooka and then upgrading them to the max.

Finally, when you can afford it, get the Jackhammer too. Upgrade them as much as possible for maximum ammo.

It’s all random! That’s why you should always have the guns you are most familiar with and have them upgraded to the maximum, because you don’t know which one you start with and which one you’ll get at the next checkpoint.

Useless weapons are weapons that cost money and are not that good. In my case, the Useless weapons (read: ignore them completely) are Squid Launcher, Uzi, Magnum, Explosive Revolver, AK 47, Twitgun, Blade Boomerang, M16 Rifle and Sawblade launcher.

I stopped purchasing new ones after the Sawblade launcher, but I guess that the Patriot is also pretty crappy.

Good weapons are the shotguns and Bazookas. In my case, I am still starting with: sawed off shotgun, shotgun, Jackhammer and FartBazooka. Perfect combo!

George the TRex is a great choice for a boost (I yet have to actually see the Texla Box work for me!) But with George, make sure you only use him when you are pretty far out in the game – he’s a life saver and stays with you for quite some time, destroying enemies around and generally keeping you safe.

6. Choose the best character to drive your vehicle

In my case, it has to be a lady until I get to buy the Ambulance, where it should be the Nurse.

But make sure you check out the characters and choose the one that seems best for you. Archaeologist, Mechanic, Cop and the Hobo are also nice choices.

Every time you start a new run, you can buy new gadgets. Unless you really have many coins to spend, I would suggest ignoring them altogether.

If you have the coins, get the Ammo Cache as double ammo is really helpful later in the game (after 2,000 meters).

8. How to stay away from getting damage

One of my tricks during the “race” is to shoot to prevent. This means that I regularly shoot my bazookas or shotguns by tapping the center of the screen, about once per second (maybe faster).

This way, all the enemies, especially the rocket launching robots don’t have that much time to be a pain in the engine.

Also, the bullets of the shotgun get the chance to spread out and they cause more collateral damage.

9. Listen to the calming menu music and be patient

While playing the game you might turn all red and feel the need to smash your device, but don’t do it.

Remember that it’s just a game and you’ll get better at it the more you play it and the better items you have.

It will be some time until you will be able to get past 2,500 meters constantly so don’t lose hope and keep trying! There are also a few surprises waiting the more you move!

And this is it! These are my tips and tricks and strategy advice for Nuclear Outrun. Basically, it all sums up to a good selection of vehicle, driver and upgraded weapons. If you have other approaches, let us know about your strategy by commenting below. 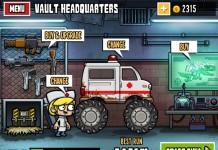