Home Guides No More Heroes III: How to Defeat FU

In No More Heroes III, Travis Touchdown goes on a very bloody journey to defend the planet from some weird galactic invaders, and at the end of the road, he will have to take down the being that orchestrated the invasion of Earth, the powerful FU. He is the final boss of the game, so prepare for a very difficult fight.

Here’s everything you need to know to defeat FU and say goodbye for good to these annoying invaders from space.

FU is the being behind the invasion of Earth, and he is known as a planet destroyer, having destroyed countless worlds before setting his eyes on Earth. As such, Travis has no choice but to defeat him to save the entire world. FU is fought at the end of Episode 10 – Friends, the game’s final episode.

Fu drops the Baptiste Family Secret Treasure and the Mark of a Goddamn Superhero upon defeat. The latter is only dropped when FU is defeated in the Time Machine on Death difficulty.

How to Defeat FU

FU has eyes all over his body that allow him to see Travis clearly when he is attempting to attack, blocking his attacks with ease. As such, you need to attack FU when his eyes are closed. This happens right after he is done attacking: dodge or block these attacks and retaliate quickly to deal damage.

While blocking is effective against most of FU’s regular attacks, it will drain battery power and force you to recharge. As such, it’s better to dodge these attacks, as this allows you to save battery power and go on the offensive more often.

The Death Kick and Death Force skills are extremely useful in the fight against FU as you can use them to stop his charged attack. Death Kick goes over the Dark Energy Waves too, making Travis invulnerable to them, so make sure to take advantage of this if you are in a bind. 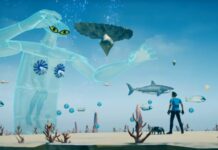 No More Heroes III: How to Defeat Sonic Juice