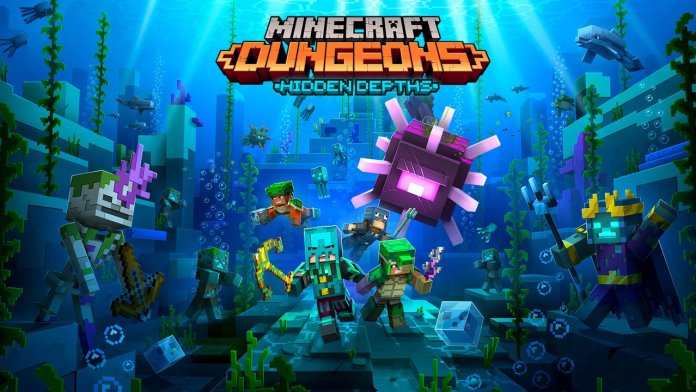 It seems like there is no rest for the developers of Minecraft Dungeons, the dungeon crawler Minecraft spin-off game now out on Nintendo Switch, PC and consoles. Last week, the team released a new update introducing Cloud Saves support, and today it has been announced that the update was only the beginning of a month filled with dungeon crawling fun!

The game’s next DLC pack, the Hidden Depths DLC, will be released later this month, on May 26, on Nintendo Switch and all other formats.

Dive into a new Minecraft Dungeons adventure just in time for summer! Minecraft Dungeons is making a splash on May 26 with the next DLC, Hidden Depths. This won’t be your average day at the beach though. You’ll have to fight a spreading corruption that has reached the darkest depths of the ocean! Hey, it wouldn’t be Minecraft Dungeons if it were easy, right?

Plenty of free Minecraft Dungeons content is also on the way, including new enchantements and levels, but also a new Raid Capitains feature, super challenging enemies that will change the way you have to approach the game. By defeating them, you will be able to get brand new treasures.

More details on what is coming to Minecraft Dungeons in the future can be found on the game’s official website.

Minecraft Dungeons is now out on Nintendo Switch, PC and other consoles worldwide.