Home Game Guides Might & Magic Heroes: Era of Chaos – Best Units in the... 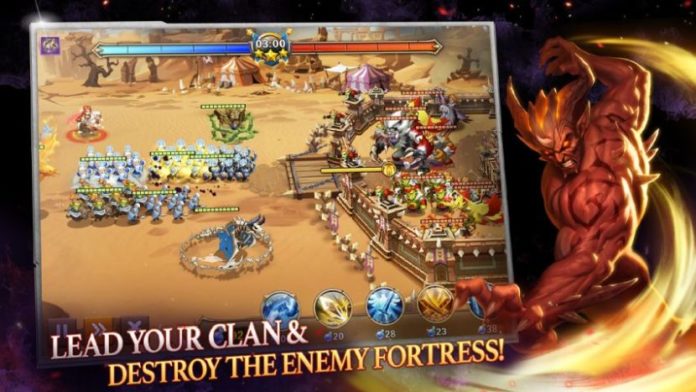 There are currently 43 troops that you can use to create your best team in M&M Heroes: Era of Chaos – but which are the best? This is what we’re going to answer in today’s article covering the best units in the game.

Please have in mind that we are talking about the units or troops here, and not the Heroes (you can find our list of the best ones here if that’s what you are looking for).

But now back to the units themselves, we’re going to cover a few basics to better understand how they work, because simply saying that “x units” is the best in Might & Magic Heroes: Era of Chaos is not possible, as there are multiple factors to consider. And we’ll try to cover everything in today’s guide.

Understanding the unit types in the game

We have talked about this more in depth in our guide, but I will quickly go through this in today’s article as well.

Each unit in the game has one of five roles and it’s a bit difficult to say that one role is better than another. For example, if you compare the Pikeman with the Swordsman, you can say that the former is better because it has better attack. But the Swordsman is great as acting as a tank thanks to his much higher health and defense.

So in today’s article, we will consider all things when deciding which heroes are better than others… but until then, here’s a quick recap of the roles:

Some of the factions that we know so well from the Heroes of Might and Magic series are present in Era of Chaos (with others most likely to be introduced by future updates). And these factions can have an effect over the general stats of the units, although to a lower extent.

The factions present in the game are: Castle, Rampart, Stronghold, Necropolis, Inferno, Conflux and Tower. The missing factions are Fortress and Dungeon.

Each faction has a number of units available in the game, some better than the others. And while the factions themselves have a minor influence over the stats of the units, they do matter if you’re using specific heroes or have invested in various roster groups.

Probably the golden rule of thumb is that the rarer the unit, the better it is. In other words, the rarest units in the game like the Angel or the Green Dragon will always be better than SR and especially R units.

However, the rarest units in the game are more expensive to develop, especially when it comes to ranking and skilling them up, so in the end a balanced band of SR units can also be extremely lethal.

But in general, it’s good to know that the rarest units (marked with SSR in the game) are the best.

The best units in Might & Magic Heroes: Era of Chaos

Now that we know the basics, let’s try to look at the best troops in the game. I will try to divide this list into categories – listing the best units based on their rarity, so that you can focus on them from top to bottom (depending on what you have unlocked).

Remember that R units will become obsolete really, really fast as you will get enough rarer units to fill up your team early in the game, so don’t put too many resources into developing them (unless you need them for various stages or other boosts).

These are the rarest of them all – and most difficult to get – and I would say that no matter which one you have unlocked, it’s a must have in your team setup. But if you want to rank them, here’s how I would do it:

A solid unit that’s difficult to take out as it regenerates health as other enemy units are killed and gets defensive boosts throughout the battle. Also solid for crowd control thanks to its ultimate spell and decent damage dealer. A good unit!

Another beast of a troop that deals damage to all enemies and whose normal attacks affect 2 units instead of one. Stackable boosts and various other bonuses make him the best ranged unit in the game.

A beast of a hero with stacking bonuses to damage and critical hits. Absolutely lethal and probably the best Charging unit in the game.

An amazing unit focused on damage dealing. Probably the best damage dealer in the game, with stacking bonuses – and also aided by other units’ spells.

My biggest problem with it is that the Naga’s Ultimate deals damage to random heroes in battle – but in the end, it’s still massive damage that we’re talking about!

A great damage dealer that starts with a literal blast (attacking opponents as soon as the battle starts) and dealing all sorts of damage to various enemies on the board, including constant damage to all enemies based on a percentage of its health.

It also deals 50% more damage to Castle Units and the fact that it flies to the back is a massive bonus, making him really powerful against specific troop formations.

Great hero that deals damage to random units and stuns then thanks to his ultimate skill, but the biggest asset is the Resurrection skill that revives one fallen friendly unit.

He also increases health regeneration of all friendly units in the team, while his passive boosts the Angel’s attack and gives bonuses against Inferno units.

An interesting hero that deals damage to the back-row units and deals area of effect damage as well, causing bleeding and inflicting more damage against bleeding units. He has all sorts of conditions in place in order to truly max out, so it’s a difficult unit to play in most situations.

The Bone Dragon wasn’t great in HoMM and he’s not that good in this game either. He plays more as a support unit, causing low morale (reducing enemy attack speed) and various other debuffs. There are surely much better options out there.

There are more SR units in the game and I won’t try to rank them from best to worst, as this is really difficult to do, all things considered. However, I will share with you below the best SR units in the game, in my opinion (but in no particular order):

Vampire: Not only that you get it early in the game, but extremely solid unit with life leech.

Pegasus: Similar to the Firebird, deals a lot of damage and resurrects.

Ogre: A solid tank that boosts all troops on the battlefield

Roc: Somewhat similar to the Black Knight, it deals a lot of damage and debuffs enemies. Unfortunately, no stacking bonuses to damage here.

Cyclops: A great ranged unit, dealing lots of damage and getting bonuses when pitted against 9-unit troops

Lich: More useful when paired with other Necropolis heroes, it boosts their stats and can even summon Skeletons.

Genie: Decent healer in the game. Various buffs for fellow units, although some effects are random.

Dwarf: Amazing tank unit with buffs for nearby troops. Great to have in your team!

Demon: Better in combination with other Inferno units, as it get massive boosts from that.

Pit Fiend: Probably the best healer in the game. Even better with Inferno units.

These would be the best units in the game – but just having that information is not enough when it comes to setting up the perfect team. Some units are better when used together with other troops and even other heroes. Also, even their position on the battlefield can make them more or less useful, so simply knowing which are the best troops in the game is just a part of the puzzle.

Sure, it is the most important one, but there are still other things to consider – and even more troops that you might end up using if you haven’t unlocked the enough from the list above to build your team (or if you really have others massively skilled and leveled up).

What do you think, though, about the heroes above? How would you group them together in an ideal team? Or maybe you have other suggestions for our list of the best units in Might & Magic Heroes: Era of Chaos?

Might & Magic Heroes: Era of Chaos – Best Units in the Game