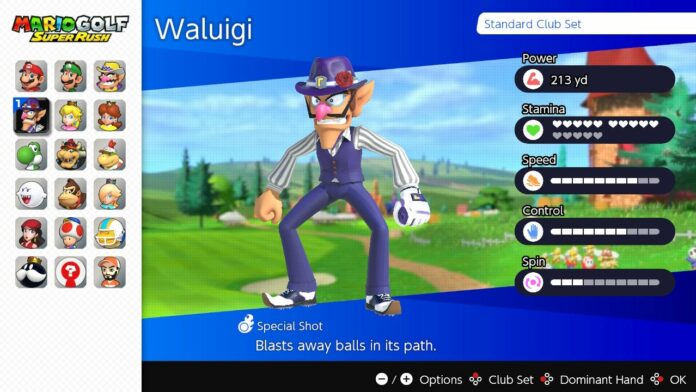 Mario Golf: Super Rush lets players create and customize their own characters by changing their appearance and stats, but if you have no intention of playing Golf Adventure mode, and prefer to use pre-made characters, the game offers you 16 different characters lifted from the Super Mario Bros. series all coming with unique abilities that make them better at certain play modes.

Here’s everything you need to know about Waluigi and how to play him properly.

Waluigi is far from being one of the best characters in Mario Golf: Super Rush due to his stats. Power and Control are quite average, making the character a bad choice for Standard Golf and other play modes. Where Waluigi excels, however, is in Speed Golf: his extremely high Speed and Special abilities make him extremely good in this mode, as there is no need to make powerful shots that can cover long distances.

Waluigi’s Special Shot is Slim Stinger, a powerful shot that blasts away any ball in its path. By using this shot, you can mess up your opponent’s positioning, so it can be useful in a variety of situations, especially if they have managed to get the ball close to a hole.

Waluigi’s Special Dash is Dance-Off Dash, a special dash where Waluigi starts pirouetting around, knocking down any opponent on his path. This Special Dash is unique among all the others, as the character stops completely once the special move ends, so plan accordingly if you’re using it to move around a course and need to reach a certain location.