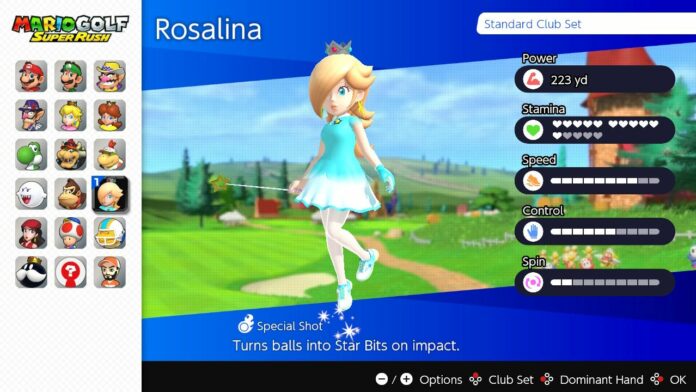 Mario Golf: Super Rush features an extensive character roster that makes it easy for all kinds of players to find the perfect one for them. Some are meant to be played only by expert players, due to specialized stats and hard-to-use special abilities, while others are perfect for newcomers.

Rosalina is undoubtedly among the latter. Here’s everything you need to know to play the character properly.

Rosalina is an extremely balanced character that can be used effectively in pretty much all play modes. Her base Power of 223 is the highest among characters that are not specialized in the stat like Bowser and Donkey Kong, while her above-average Stamina and Speed make her an excellent choice for pretty much every play mode. She also negates all effects of bad terrain, making her even better in courses like the Bowser Highlands or against characters whose special abilities are meant to disrupt movement, like Luigi’s Special Dash.

Rosalina’s Special Shot is Shooting Star, a special shot that turns balls into Star Bits on impact, adding a significant curve to shots. This ability, like similar ones, is best used on the green to make it more difficult for your opponents to putt.

Rosalina’s Special Dash is Luma Dash, a special dash where Rosalina summons two Lumas to knock down opponents. As Rosalina rises when she activates the ability, she can miss opponents that are too close on activation, so use this ability accordingly. Additionally, the two Lumas grant a decent range of effect, but they must hit opponents directly to knock them down.