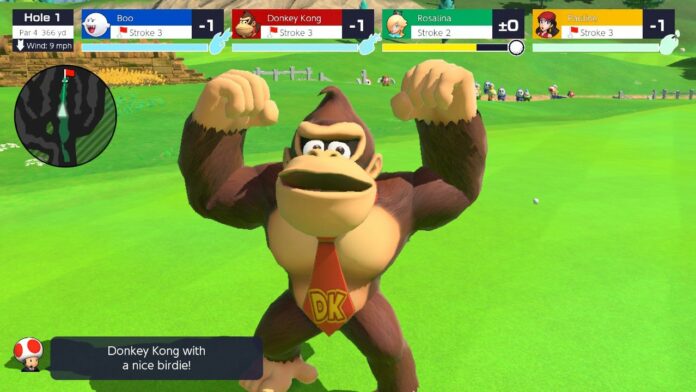 Mario Golf: Super Rush features 17 different characters, in addition to the fully customizable Mii characters, that all come with different stats and special abilities. While all the characters play somewhat differently from one another, some character archetypes tend to overlap, resulting in the Special Abilities being the only thing that differentiates them.

This is the case of Donkey Kong, who mostly plays like Bowser. Here’s everything you need to know to use the character properly.

As already mentioned, Donkey Kong plays pretty much like Bowser, coming with an extremely high Power stat and acceptable Speed and Control. With such decent stats and good Special Abilities to boot, there are no reasons to not play Donkey Kong, as the character can do well in pretty much all play modes.

Donkey Kong’s Special Shot is Burly Strike, a special shot that simply blasts away other balls in impact. This ability is best used on greens to blast away the opponents’ balls so as to make them waste time reach the green and putt their balls.

Donkey Kong’s Special Dash is DK Dash, a fast-moving Special Dash where he bounces and rolls on the ground, knocking down opponents if hit at any time during the move, even while leaping and landing. The only downside to this Special Dash is that is a little difficult to steer, so try to use it when you need to go straight to avoid wasting Stamina.