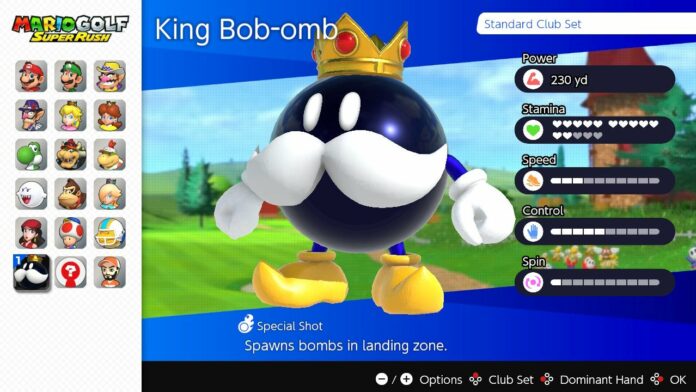 Mario Golf: Super Rush features a very interesting and diverse character roster that is extremely balanced, thus allowing all players to find a character that best suits their play style. Not all characters are 100% viable in all play modes, that’s for sure, but it is difficult to find a more balanced character roster in all of the Mario sports games released so far.

Here’s everything you need to know about King Bomb-omb, a debuting character that is also among the most powerful in the game.

With a Power stat of 230yd, King Bomb-omb is the strongest character in the game. This very high stat makes him a decent choice for pretty much every play mode with the exception of Speed Golf, as his Speed and Control are quite low. On the other hand, his excellent Special Abilities make up for these two low stats, so expert players may be able to make him work even in play modes where Speed and Control are way more important than sheer Power.

King Bomb-omb’s Special Shot is Bomb-ombs Away, a special shot where the character spawns multiple bombs in the landing zone, blasting balls away. Like similar shots, this one is better used close to the hole, although this Special Shot is way more effective than most other similar ones due to its wide area of effect.

King Bomb-omb’s Special Dash is Kaboom Dash, a special dash where King Bomb-omb rushes forward to run over other opponents while leaving a trail of bombs behind. What makes this Special Dash so useful is not only the ease of use but also the final leap the character takes at the end of the Dash, which can be used to jump over obstacles.