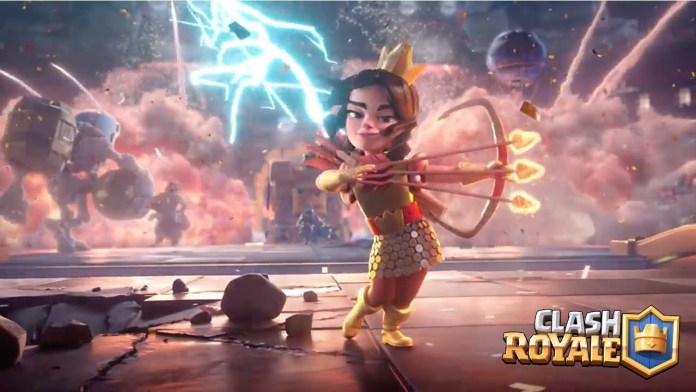 How to use the Princess in Clash Royale

The Princess in Clash Royale is best used as strong support or siege character. Thanks to her splash damage and long-range you can deploy powerful ground troops in front and then use Princess to support them. However, her moderate damage combined with her very slow attack rate makes her a weak solo support card. You can couple her with other cards and spells such as the zap, which works beautifully with Princess as together they can quickly take out Minion Hordes and Goblins.
You can even deploy her at the bridge at the start of the match to get some early damage and to determine which card your opponent has in store to tackle her.

RELATED – What do Star Levels Do in Clash Royale

How to Counter the Princess in Clash Royale

If you are looking to counter or defend against the Princess in Clash Royale, using the area damage spells is one of the best counters and it is impossible to defend her from them. You can use the Log, Arrows, Fireball, and Poison against the Princess. The Barbarian Barrel can also do the job. If your deck isn’t too spell-heavy, you can use Dart Goblin as a counter to Princess since the Dart Goblin can survive 1 attack from the Princess and after defeating her, will go on to damage your opponent’s Tower. Miner is decent for the Princess as well. It can eliminate her in two strikes and can be deployed anywhere around her.

RELATED – How to Trade Tokens in Clash Royale

How to Use and Counter the Princess in Clash Royale