Home Game Guides How to Trap the Wither in Minecraft 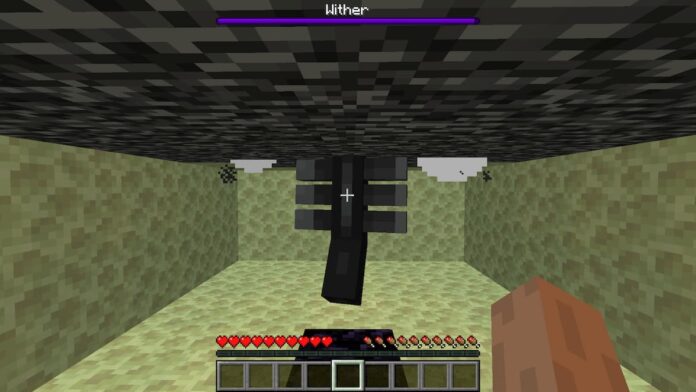 The Wither is one of the two boss-type monsters in Minecraft. Unlike the Ender Dragon, the Wither does not spawn naturally. Players can summon the Wither using four soul sand blocks, and three wither skeleton skulls.

But before summoning the Wither, players have to be wary of the nearby location. The Wither’s strength surpasses Ender Dragon’s and has more attack strength and health points. Moreover, the Wither can cause giant explosions and destroy nearby places rapidly.

Instead of taking the risk of letting the Wither run wild, players can defeat the boss by traping it in a bedrock cage. This article is a guide on trapping the Wither mob in Minecraft.

Trap The Wither in Minecraft

In order to trap the Wither, players will have to make use of the indestructible bedrock blocks. Since players can decide where the Wither should be spawned, it is easy to force it into a bedrock cage.

We will use the bedrock blocks found underneath the exit portal in the End dimension for this tutorial. Before continuing with the tutorial, players should ensure the Ender Dragon is defeated. After reaching the End dimension, follow these steps to summon the Wither and trap it:

1) Clear the area underneath the exit portal

The first step is to create a small area under the exit portal. This is where the Wither will be spawned. Make sure that there are only two blocks of the distance between bedrock and floor, as shown in the above image.

2) Mark the block at the origin

Check the coordinates and replace the at X: 0 Z: 0 with obsidian, as shown in the above image. This is where the Wither will be spawned. Using a block with high blast resistance like obsidian is highly recommended. Otherwise, players might have to mark the block every time as the Wither’s explosion could destroy it.

Now, players will have to create the T-shape using four soul sand blocks. The center of the T-shape should be right above the block marked in the previous step. Look at the above image to understand how the soul sand needs to be placed.

Attach three wither skeleton skulls to the T-shape to summon the Wither. Summoning the Wither right below bedrock at X:0 Z:0 would cause the Wither’s head to get stuck inside the block. Since bedrock is indestructible, the Wither would stay trapped inside it and slowly suffocate to death.

Players can watch this video tutorial by Shulkercraft for a visual explanation of how to trap and kill the Wither in Minecraft. This method is tested in Minecraft Java Edition but might also work in Bedrock Edition.

Also Read | How to Summon the Wither in Minecraft Bedrock

How to Trap the Wither in Minecraft