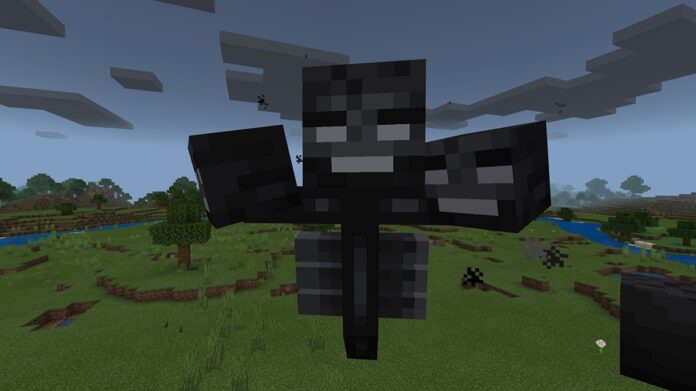 Minecraft’s spooky hostile mob boss, The Wither, is a formidable foe constructed by players. Apparently inspired by Terraria’s mechanic for summoning bosses, this mob boss is the only way players can access Nether Stars—an item used to craft beacons. It floats (but somehow still creates the sound of footsteps) and shoots explosive skulls at players and mobs. The Wither can be spawned anywhere by combining four blocks of soul sand and three wither skeletons, all of which can be found in the Nether.

Because it drops such a unique item and a good amount of XP orbs, the Wither is a difficult creature to defeat. Be prepared with an iron sword (or better) or a bow, enchanted with at least Smite III or Unbreaking II, and a full set of armor. You will also want to take health regenerating foods and potions, as well as iron blocks to spawn golems to fight alongside you.

There are some key differences when attempting to defeat the Wither in the Java edition vs the Bedrock edition, however, including its health points and behavior. Find out below more details on how these editions differ when dealing with the Wither mob boss.

The Wither in Bedrock vs Java Versions

In the Bedrock version, the Wither is superior in strength, making it withstand attacks for longer than in the Java version. Its health points are double what they are in Java at 600 points (in a purple health bar) vs 300 points (in a pink health bar). They are also more likely to fly in the Bedrock version and use a dash attack, as opposed to Java, where the Wither tends to stay put. This makes it far easier to attack the Wither when using the Java edition of Minecraft.

Although it is easier to attack the Wither in Java, it has a slightly larger hitbox. Its hitbox is 3.5 x 0.9 blocks vs the Bedrock edition’s 3 blocks x 1 block wide.

Related: Minecraft: How to Go to The End

In Bedrock, when the Wither is at half health, it will spawn between 1 and 3 wither skeletons and create a shield! Watch out for this, and keep plenty of space between yourself and the Wither.

When the Wither is defeated in the Bedrock edition, a large explosion occurs, dealing up to 99 damage to mobs and players and destroying nearby blocks. This does not happen in Java.

Once the Wither has gone and left the Nether Star behind, Java players must pick it up within 10 minutes before it despawns. In the Bedrock edition, it never despawns.