Home Guides Minecraft: How to Go to The End 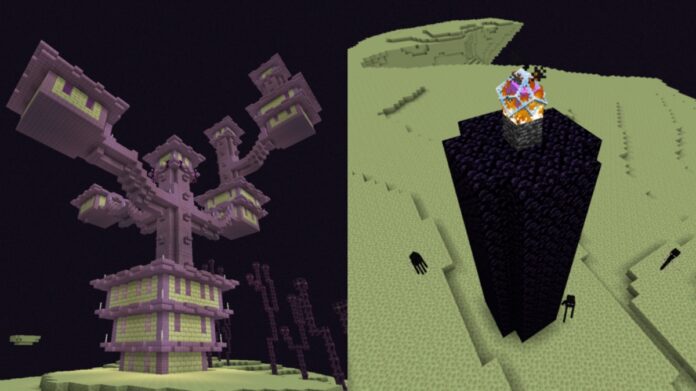 The End in Minecraft is a large dark island surrounded by a cluster of smaller islands, all made of end stone.The main island and the smaller islands are separated by the void, and daylight never occurs here, just an endless starry night of dim light.

Blocks and items behave basically the same way as they do in the Overworld except for these things:

Players can access The End by first crafting up to 12 Eyes of Ender using Blaze Powder and Ender Pearls. They then use an Eye of Ender to locate a Stronghold, a structure usually found underground at bedrock level. Inside the Stronghold are various rooms including an End Portal Room which contains a Silverfish Spawner and an End Portal. To activate the End Portal players must place an Eye of Ender on each of the End Portal Frame blocks- meaning 12 Eyes of Ender may be required, although there is a 10% chance that one of the blocks will already contain an Eye of Ender. This will activate the 3×3 inner blocks.

Related: How to Make a Portal in Minecraft

Once players step into the End Portal there is no way to go back or change your mind, the portal takes players straight to The End, arriving on a 5×5 platform of Obsidian. Remember: the only way back to the Overworld is to defeat the Ender Dragon (found flying above the ten towers of Obsidian), or to die, so enter The End at your own risk!

Minecraft: How to Go to The End