Home Game Guides How to Recruit Trish in Triangle Strategy 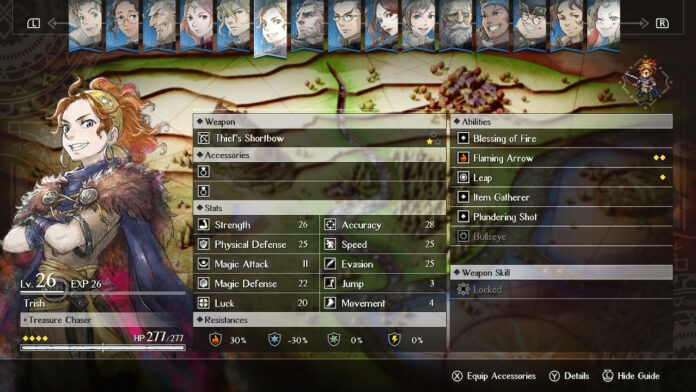 At the start of Triangle Strategy, you will get to meet two somewhat goofy bandits, Travis and Trish, who will attempt to make Frederica’s arrival in Glebrook one to remember, but not for a good reason. After defeating them, the two will flee from the battlefield, and later in the game, you will come head to head with them again, only that they can join your army, depending on the choices you make during the campaign.

Here’s how to recruit Trish in Triangle Strategy.

How to Recruit Trish in Triangle Strategy

Travis and Trish can both join Serenoa’s army in Triangle Strategy, but you won’t be able to get both of them in a single playthrough, as they are locked behind different story paths.

To recruit Trish, you will have to protect the Roselle in Chapter 11 and then visit them in Chapter 15. After this Chapter’s events, the young bandit will join Serenoa’s army permanently, bolstering your ranks with her unique abilities.

While Trish could be considered a good character even just for her weapon of choice, the Thief’s Shortbow, she also makes it ease to obtain loot on the battlefield, as she can get spoils by just passing over them, as opposed as stopping on them like other characters. She also comes with great mobility, which makes her a real asset in combat even if you are not looking to farm items.

How to Recruit Trish in Triangle Strategy