Home Game Guides How to Recruit Travis in Triangle Strategy 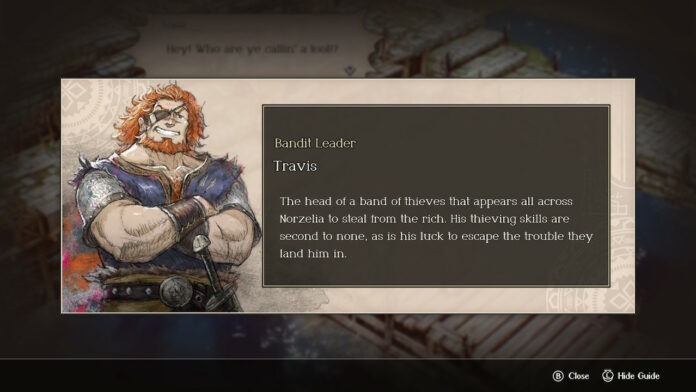 Triangle Strategy is a tactical role-playing game like very few others, sporting multiple story paths and endings as well as a multitude of characters that can only be recruited if certain conditions are met.

This is the case of Travis, a character that you meet right at the start of the game but that can only join in later Chapters. Here’s how to get the bandit to join House Wollfort’s army

How to Recruit Travis in Triangle Strategy

To recruit Travis in Triangle Strategy, you will have to fulfill a couple of conditions, something that makes it difficult to get the bandit on your side if you don’t know how to do so.

To get Travis, you will need to kick out the Roselle in Chapter 11 and then visit them in Chapter 15. If you fulfill these two conditions, Travis will join your party permanently at the end of this Chapter’s events.

While other characters can be more useful than Travis, he does play a role, the tank, that is definitely underrepresented in Triangle Strategy. Additionally, he can also hold his own in a fight, coming with powerful offensive abilities that also allow him to deal damage while stealing items from the enemy.

How to Recruit Travis in Triangle Strategy