Home Game Guides How to Recruit Medina in Triangle Strategy 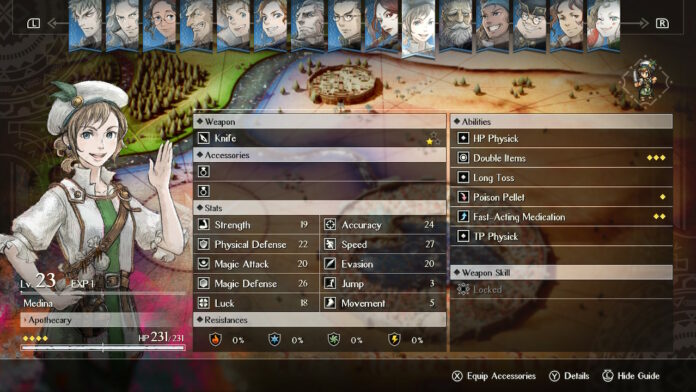 Triangle Strategy is among the most unique tactical role-playing games released in recent years. Unlike most of the others on the market, the game doesn’t feature any generic party members, but only set units with their own unique abilities and personalities.

Among the many characters that you can recruit in the game is the extremely useful Medina. Here’s how to recruit her.

How to Recruit Medina in Triangle Strategy

Medina, like a few other characters in Triangle Strategy, isn’t locked behind any story path, so you are not forced to make certain decisions if you want her in your army.

To recruit Medina, you will have to increase Serenoa’s Convictions to certain values so as to unlock her Character Story. Once Morality has reached 500 and Liberty 400, you will unlock Medina’s Character Story, which can be accessed like other Character Stories from the map by pressing the + button when an icon appears in the lower right part of the screen.

Medina is a very unique character that is comparable to the Chemist job in the classic Final Fantasy Tactics, as she can increase the potency of healing items, and use all sorts of items twice in the same turn. This makes her an extremely capable healer, as she is not entirely reliant on TP to support the party.

How to Recruit Medina in Triangle Strategy