Home Game Guides How to Recruit Hossabara in Triangle Strategy 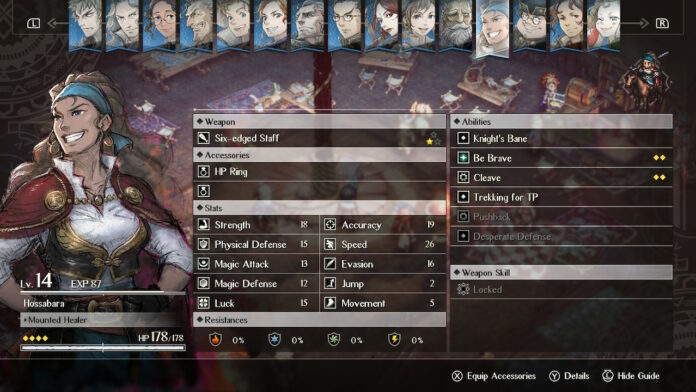 Shortly after starting your adventure in Triangle Strategy, you will become able to access the Encampment where multiple characters will provide their services to help you manage your army, purchase items and more.

While these characters look nothing more like NPCs, they all can actually join your army if the right conditions are met, becoming able to aid you in battle as well.

Among these characters is Hossabara, the barkeep. Here’s how to recruit her.

How to Recruit Hossabara in Triangle Strategy

Hossabara, like all of the characters in the Encampment and a few other ones besides, can only join Serenoa’s army in Triangle Strategy by unlocking her Character Story, which is, in turn, unlocked by reaching specific values for Serenoa’s Convictions.

Hossabara is a very unique character, and the only mounted healer in the entire game. With good strength and defense, Hossabara can also fight effectively on the frontline, and even heal herself and an ally when performing a follow-up attack, which makes her extremely versatile and useful in a variety of situations.

How to Recruit Hossabara in Triangle Strategy