Home Game Guides How to Recruit Flanagan in Triangle Strategy 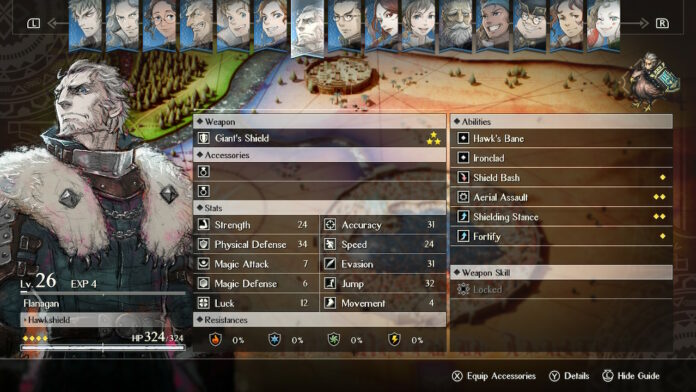 Unlike most modern tactical role-playing games, Triangle Strategy doesn’t feature generic units that can be customized with different classes and abilities. The game instead features set characters that come with unique abilities that give you access to different combat options that allow you to approach certain combat scenarios differently.

Among the optional characters that can be recruited in Triangle Strategy is Flanagan. Here’s how to do so.

How to Recruit Flanagan in Triangle Strategy

Flanagan is not locked behind a certain story path in Triangle Strategy, so it is possible to recruit him regardless of the choices you have made in the story. To recruit him, however, you will have to unlock his Character Story and to do so, you will have to increase Serenoa’s Conviction to certain values.

To unlock Flanagan’s Character Story, you will have to increase Serenoa’s Morality to 1050 and Utility to 750. Once you do, you will see a new icon appear in the lower right part of the screen. Press the + button to interact with the icon, experience the Character Story and recruit Flanagan automatically at the end of it.

Flanagan is a unique take on the tank character archetype, featuring high defense, the ability to restore his HP at the start of every turn, and amazing mobility. Like Hughette, however, he is weak against archers, so make sure to keep him as away from them as possible to avoid an unwanted defeat.

How to Recruit Flanagan in Triangle Strategy